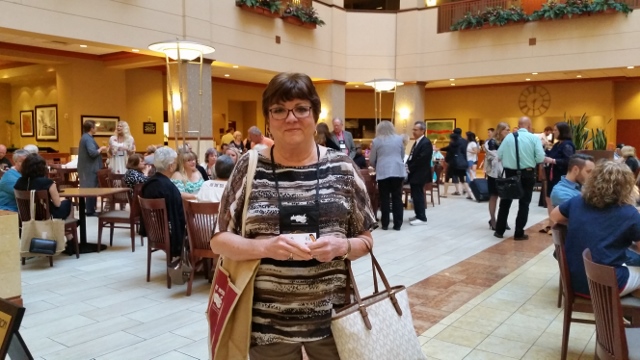 I feel so privileged to live in a city with its own annual writers' conference. I started going in 2009 as soon as I realized there was such an event in the city where my husband and I had moved.

In the early years I attended the sessions to learn the basics on how to write, taking dubious notes and asking questions. Then came workshops on writing query letters and finding a publisher. When I had a book contract for my debut novel, Just Another Termination, I showed up at other sessions taking notes and asking questions about marketing and promotion. I even went to a very early Sunday morning one about the "swag" authors need (book marks, cards, pens, gimmicks).

Killer Nashville has everything needed for any wannabe author.

I've been on at least one panel for the past three years. This year I had a fun panel (below) on Saturday August 26. It's name:
A Cat, A Recipe, and an Old Curiosity Shoppe: How to Write Cozy Mysteries.

When you are a Killer Nashville panelist, Parnassus Books orders your books to sell in its makeshift conference bookstore. 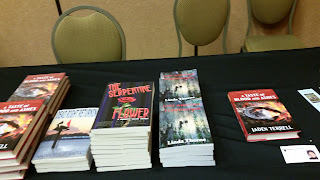 The schedule is totally different every year at Killer Nashville, so lots to see and learn. I'm already looking forward to the August 2018 conference. 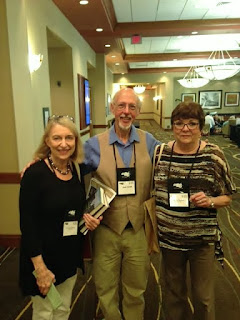 Tom Wood stopped by to talk to me and Phyllis Gobbell prior to our panel.
Posted by authorlindathorne at Thursday, September 21, 2017 5 comments:

One of the saddest things about an inadequate education is the ability to remember quotes but not be sure about who said them.

I suppose I should give you a disclaimer – I am a thoroughgoing and proud pantser. I work on what I call the suspension bridge system, meaning I know where the story starts, and approximately where it ends, and a couple of plot points in the middle. Then the rest is just putting in more plot points where they’re needed and stringing the story webwork in between. Half the time I don’t know what’s going to happen next.

Like every writer, I have friends who are devout plotters. They fill out multi-page character sheets, detailing everything from his grandmother’s maiden name to his favorite flavor of Jell-O. Then they do scene-by-scene outlines, practically noting every time a main character raises an eyebrow. They say it keeps them on track and makes them more efficient. I’ve tried it (I’m always open to ways to improve my craft) and all it made me was bored. Incredibly bored and sleepy. In one class I plotted minutely what should have been a very interesting book about terrorism, antiquities smuggling and dirty bombs. Sad, but it’s a book that will never be written. By the time I finished the outline I was soooo bored with it that it will never be written. By me, at least.

Is dedicated pantsing fraught with potential problems? Of course, but then so is rigid plotting. So is any kind of putting words in a string to tell a story, however you do it. Sometimes I hit a wall and have to back up, but surprisingly rarely. My personal belief is that a good book grows organically – that each action/scene grows logically out of what has gone before. Sometimes it takes me a while to go from one point to another, but not often. It’s really easier than it looks, and your characters – if they are real people and not just cardboard puppets – will tell you what to do. My characters just walk in, tell me their name and what they will and will not do. If I try to go against their will, they stage a silent sit-in strike until I give in, which I usually do.

Case in point : in my current work in progress, I realized that I had to have a character deliver a crucial piece of information about a series of murders. Only problem was, this character had been the first victim, and ghosts didn’t fit into this story. Last night at dinner (The Husband treated me to a luscious hamburger at our favorite place) I was chatting about the story, and he was listening most politely, when all of a sudden the penny dropped and I knew what had to be done. The expression on my face must have been remarkable, because The Husband looked up, startled, and asked if I was all right.

“The brother! It’s the brother.”

Well, he doesn’t have a brother, and mine died many years ago, so he became much more alarmed about my mental health. After all the years we’ve been married he should know better, but… Immediately I explained that the first victim had a brother, who may or may not be killed himself after delivering the important piece of information my sleuth needed. The Husband’s comment? “Oh.”

Once I tried to explain my working process to The Husband, who is a science-oriented military man. He listened politely, then said, “Sounds like possession.” Maybe he’s right. Whatever it is, it works for me.

One last note – this organically-grown, pantsing way of writing is not, repeat NOT, a license to drag in unrelated action or utilize the dreaded (and unbelievable) Deus ex Machina to solve everything. Neither can you blame a convenient wandering homicidal maniac who has been unheard of until the final chapter. Your clues have to be there. You have to play fair with the reader and give them enough so that – if they are quick and clever – they have a chance to solve the mystery. (You don’t have to dump the solution in their laps, though!) It’s not necessarily easy, but it is very satisfying for both writer and reader.

Barnes and Noble Signng a Success! 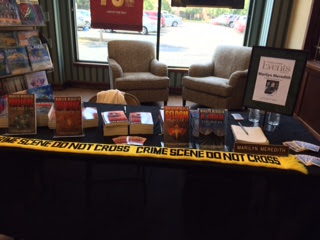 I've not had many bookstore signings in the last few years, mainly because we have no book stores nearby.

When a friend suggested I do a signing at the Barnes and Noble in Bakersfield, I was less than enthusiastic. When she said she'd arrange it, I agreed. She not only did the leg work she also promoted it among her friends.

Now this friend is someone I didn't think I knew except on Facebook, but it turns out I had met her a couple of years ago at a Sisters in Crime meeting in Bakersfield.

I did an advertisement on Facebook--don't think it did much good. Of course I promoted other ways too.

And Barnes and Noble did lots of advertising and even had books available to purchase before the event, and some people had. The store had been unable to order the two latest books--why, I'm not sure--so I brought copies.

B and N now has a great system if you bring in your own books, at the end of the event you get paid for those that sold.

I really did well, had a great time, met a lot of people, saw some old friends, signed a lot of books, and did plenty of chatting. 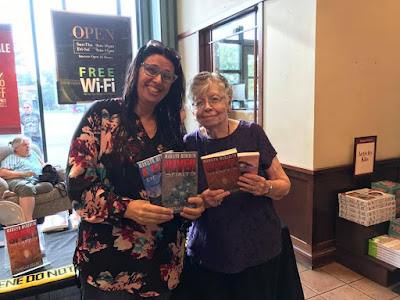 A continuation of Raising the Stakes 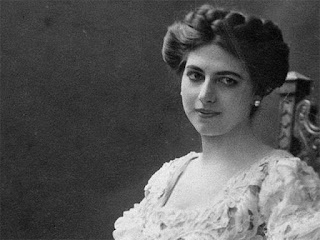 By Linda Lee Kane
A continuation of last month’s article 'Raising the Stakes'
Roles and Settings
Roles
Provide the character with more than one role and make life difficult for the protagonist (and sometimes the antagonist). The higher the stakes, the more a character will risk to reach her goal. No one is one dimensional.

I recently wrote an article about Mata Hari, the exotic dancer who was convicted as a spy in World War I. What an exceptional woman who lived a life that today we would consider pretty normal but in that time period she was considered a free-spirited bohemian. Questions I asked after reading about her was why did she have to give up her child and become an exotic dancer? Was it really society and her unconventional life style that convicted her? Did she really give up important secrets that led to the deaths of 50,000 men?

At her conviction she exclaimed,  "A courtesan, I admit it. A spy, never!" Forty-five minutes later she was brought before a firing squad, she blew them all a kiss of farewell, than they fired.

Don’t cheat the reader by failing to use every ounce of emotion and action to build higher stakes.

In life, things are never quite what they seem, Mata Hari played more than one role in life, as do we all. Life was difficult for her, and what greater stakes than life or death.
Setting
Tension and suspense explode when a setting is unfamiliar and hostile, and it forces the character to grow. How does a writer accomplish an antagonistic setting? Begin by concentrating on a few traits of a villain: determined, powerful, an outward appearance of beauty or charm, and the ability to deceive. The adversity of setting can be obvious or hidden, but include it in ways that force the character to make tough decisions and then accept responsibility for those actions. 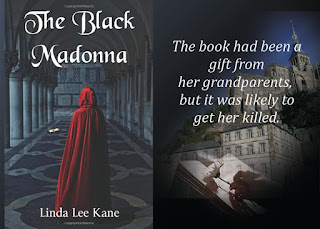 Raising the Stakes is not an engine additive to a story. It’s a process that begins long before the first line is written. It’s a mindset that influences every technique of novel writing and coincides with character traits. Look at your story. Where can you Raise the Stakes? 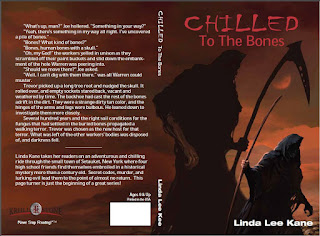 Linda L. Kane MA in Education, PPS, School Psychologist, and Learning Disability Specialist, is the author of The Black Madonna, Witch Number is Which, Icelandia, Katterina Ballerina, Cowboy Jack and Buddy Save Santa, and Chilled to the Bones. A 2017 release date for Clyde to the Rescue, and Death on the Vine, A Daisy Murphy Mysteries.

What's Interfering with my Writing Now

Any of my Facebook followers know that there is a big fire around Springville where I live. My little town is situated in the foothills of the Sierra, surrounded by mountains of many sizes.

We live on the downside of the town, but many have chosen to have their homes in the higher elevations surrounded by many beautiful trees.

As I'm writing this, there's been many evacuations of homes in the mountainous areas, and even an area only a couple of miles from town. The fire has moved all the way over to Black Mountain which is part of the Indian Reservation.

Though there are many firefighters and volunteers, fire trucks and bulldozers available, the biggest problem is the rugged terrain with no roads to access. Because of the heavy smoke, the air bombers haven't been able to fly.

Our little church has opened its doors to anyone who needs shelter. We do have a shower and places where people can rest and sleep, plus a kitchen and food. Food because we have a food pantry.

I had planned to work on my manuscript this a.m. but I am continually checking the fire status. My hope is by the time this is to appear, I can add some good news.