Oh, My. I've Sent Off My Manuscript to First Readers

Yep, this is nervous time.

This is the next offering in the Deputy Tempe Crabtree mystery series. I really thought when I finished End of the Trail that would be the last one in the series. However another idea popped into my head, and I was off and running. Well, not really running, but working away on my computer.

While I was writing, I was having fun like I always do when I'm writing. And I don't know about the rest of  you writers, but when I'm done, or think I am, I begin to have doubts.

I'm doing something different this time. After going over it myself and finding lots of misspelled words and other things I had to fix, I decided to send it off to two friends who'd long ago offered to take a first look at a manuscript. I've done it. It's now in their hands, and yes, I'm wondering if they'll even like it.

By the time this appears, I will have returned from a research trip to Temecula, to check and see if some of the things I included in the books will really work.  Yes, this latest takes place in Temecula, one of my favorite cities in lower Southern California. I have relatives who live in and around there, so I'm familiar with the area, though I wrote about parts I haven't seen. I also made up a place and I needed to see if it actually works as I wrote it. More about that in a later post.

Hopefully, by the time this is posted, I'll know what I have to do on the newest Tempe tale.

by Janis Patterson
I’ll admit it - my writing schedule has gone to pot the last two months. And if you want to know the truth, I don’t care a bit. The Husband retired at the beginning of the year and even after 20 years of marriage (20! How did that happen?) it is a big adjustment to have him home 24/7.
Before he retired we discussed with due seriousness that we both knew men who had retired after long and illustrious careers (like he did) and who died within six months (as I am determined he will not!) simply because they had no responsibilities and no direction. I am a quiet and reasonable person who rarely gives orders, but for this I made an exception. He can have 3 months of total relaxation. He can do - or not do - anything he wants. For 3 months.
We have 1 month to go.
In the meantime, we have been having fun - even during the recent Snowpocalypse, when we were without any light or heat for 30+ hours and the temperature outside went down to -1F. (Very unusual for our area, in fact almost unheard of!) We put on several layers of clothes and, wrapped in quilts, huddled in front of the gas fireplace. By the way, gas fireplaces put out LOTS less heat than a real wood one, but when it’s -1F who cares? It’s a fire... We gathered our dog inside the quilts with us and talked and laughed. When our teeth weren’t chattering, that is!
So - what next? Actually, it has already started. After a career in science, The Husband is becoming involved in my career. It’s a big deal - he’s learning the business from a standing start, and has already aced putting up several ads for me! I am so proud of him.
That means he’s been taking classes, doing test ads and actually studying the business. It also means I have been trying to answer his questions and explain/justify things I really can’t, because I’ve always known them. It gets complicated. However - it’s wonderful to have a partner. I don’t know if we’ll make lots of money from this new partnership, but let’s face it - wealth really means more things than just money, and his interest in and support of my career make me a very wealthy woman!
Posted by Janis Patterson at Wednesday, March 17, 2021 11 comments:

Revisiting the Topic, Include the Virus or Not 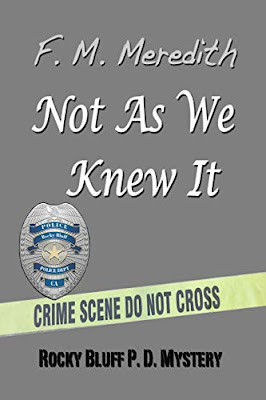 As I wrote before, I chose to include the virus in Not As We Knew It  because the Rocky Bluff P.D. series is in more or less real time. And no, it didn't impede any of the action as people have suggested it might. It actually gave ms some ideas to add to the plot.

Remember, our police officers are having to deal with the virus every single day as they go about their usual business, enforcing the law and protecting the citizens of the city or county they work for and in.

Wearing protective masks and gloves is mandatory in most places. I wear a mask when I shop, and when I enter a restaurant. I don't wear one around the people I see all the time. What I find annoying about the normal mask is I can't see people smile. And without seeing people's mouths sometimes I don't understand what they are saying, since I'm a bit hard of hearing.

Wearing a mask and being around people who wear them definitely keeps one from seeing emotion in someone's facial expressions. This could give a police officer a false impression of someone, and his/her reactions to an event. Something to consider if you do include the virus in a book.

Another problem I have is when someone is wearing a mask and all I can see is his/her  eyes, I don't always recognize the person. This has happened to me twice with old friends I haven't seen for a while. And in another case, some man hollered a greeting to me in a grocery store and I had no idea who it was.

Because of all the above, I purchased a clear, full face plastic mask, and it's what I wore at the two in-person events I've been to recently. I have another mask I wear when I'm shopping because I keep it in my purse.

For anyone who is interested, Not As We Knew It can be purchased for Kindle or in paper from Amazon. https://www.amazon.com/Not-As-Knew-F-M-Meredith/dp/B08NDT3FW5/ref=tmm_pap_swatch_0?_encoding=UTF8&qid=&sr=

Remember, I write this series as F.M. Meredith.