My only excuse is I've been really, really busy--and then I was tired.

My days are really full--especially the mornings when my mind is clear and ready to work. This is my ideal time to write. However, I've been busy with other pursuits and "have-to's" leaving no good time for my work in progress. And yes there is one.

I'm nearing the end of the first draft of my latest Rocky Bluff P.D. mystery. It's been a fun one. Some insights, The RBPD is still dealing with the effects of the pandemic,the city council is unhappy with decisions Police Chief Taylor made,  a fortune teller and a philandering husband have been murdered, the mayor's daughter must choose between living with her father and her aunt, and as usual, life has it's many ups and downs for those living in Rocky Bluff.

I've also been planning a trip to Las Vegas--not for fun, but to attend my last Public Safety Writers Association board meeting. Though I hope to have helpful input, I'm also looking forward to spending time with the board members, most of whom are long-time friends.

While I'm in Vegas, I plan to see my sister and a few members of her family since they live there. I never do all the other things people go to Las Vegas for.

When I get home, it will be time to do my taxes--not something I'm looking forward to, except getting them done.

And this is my life as an author--not anything like I dreamed about. However, not matter what is going on, I still love the excitement of creating another world, and getting to visit with the characters I've spent so much time with other the years.

How is your February going?

A Peroration on the Stylization of - - Oooh! Shiny!

Pundits say that in this modern world of soundbites our attention spans are getting shorter. That’s not a new thing. Some writers have had it since forever. While this problem affects all writers at one time or another, it does seem to afflict amateurs more than professionals. Of course, with professionals not getting paid until a project is finished is a great incentivizer to complete things.

Professional or amateur, we have all experienced the ‘shiny’ moment. We’re working along on our current project when suddenly a wonderful new idea - the idea we’ve been waiting for, the perfect story, our ticket to fame and fortune - pops into our mind. As seductive as chocolate, it winds its way around our brain, whispering absolutely perfect scenes, introducing fascinating characters, spinning an intriguing storyline that is incredibly original...

So what do we do? Lots of us drop the story we’re working on - and probably struggling with - to pursue this new idea. We don’t stop to think of the litter of partially finished manuscripts that lie in our wake, as this new idea is The Story. We also tend to forget that the one we’re abandoning might have appeared as The Story at the beginning, as probably did all the others.

That’s why a lot of stories remain unfinished, and why many amateur writers never seems to complete a project. Professionals have to, or they don’t get paid, but I know professionals who have their share of abandoned/postponed projects lurking metaphorically ‘under the bed.’

Perhaps I should make a confession - I am a professional writer, and have been for decades. Because I bore easily, I never have fewer than four projects going at once. When the well dries on one, I simply switch to another and eventually they pretty much all get done. It’s very rare that I completely abandon one, but it has happened.

Let’s face it - writing is hard work. Creating worlds and populations and situations out of little but imagination and caffeine (in my case) takes dedication, application - and a lot of sitting and banging on the keyboard. The siren lure of the ‘perfect story’ that would be so easy to write is almost irresistible. We tend to forget that the current story with which we are wrestling probably first appeared as the ‘perfect story’ in an attempt to seduce us away from what we were working on at the time.

So what to do? It’s easy to say that we should ignore the siren whisperings and doggedly continue with the current project, but that’s pretty much what is necessary - especially if we want to finish it and get paid. That’s what separates the professional from the hobbyist.

On the other hand, this upstart new idea really might be the one that makes a difference in our career. Can we afford to ignore it and lose a potential success?

My solution is a common one. At first I just ignore it as the ravings of a brain bored with what I really have to do now and continue on with my current project. It’s difficult, but I do it. And you know what? After a while the perfect story, the new bright and shiny idea starts to fragment and fades away like the distracting shadow it really was.

But not always. If the idea refuses to go away, I’ll take an hour or two or three from the current project and write a boatload of notes - sometimes as many as 20-25 pages. The basic idea. Character ideas. Conflicts and resolutions. Ideas for scenes and settings and any other tantalizing things that explode in my brain. Then I put it in a ‘Future’ file and, cracking the metaphoric whip, go back to the work-in-process.

After a test of time, these ‘bright and shiny’ ideas don’t usually hold water, though there are always a couple of nuggets in each that eventually find their way into another work. Sometimes, however, about 1 out of every 8-10 or so, the idea retains its shape and luster and proves itself worthy of the prolonged attention and work necessary to make a handful of ideas into a book. That’s when ‘shiny’ becomes ‘sweet.’

Unless, of course, the writing is interrupted by a shiny new idea forcing its way into my mind, an idea that I just know is going to the The Book, the idea I’ve been waiting for, the Perfect Story, my ticket to fame and fortune... 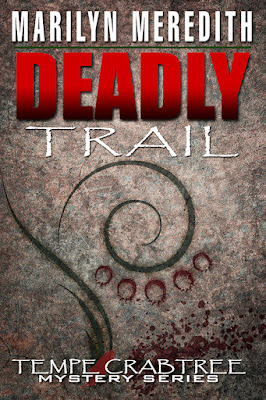 Just wanted to let the followers of this blog to know I am offering the first book in my Deputy Tempe Crabtree mystery series free on Kindle through Saturday. .

and you can learn more about it on my blog today: https://marilynmeredith.blogspot.com/

It is listed as #0 in the series as it wasn't the first one published.

Like all my other books, it has been re-edited and re-published.

There is also an audio version.