During the pandemic, many of the events and ways of selling books was prohibited.

For my new book, I was a guest on a lot of blogs. I actually enjoy writing new material for blogs.

I did manage to still do a bit of that kind of promotion: Our local art gallery of which I'm a member never closed. I was invited to speak twice at their general meeting and able to sell my books. The audience was small, masked, but very attentive.

The art gallery also held their annual holiday boutique and I had a table with my books. Though not as well attended as those before the pandemic, it was great fun and I did sell books.

In our little foothill community, the annual Apple Festival was cancelled two years in a row, but this year they held a smaller one day Fall Festival. I did well selling my books and the most fun was seeing old friends.

I've done two book signings for new books in the fellowship hall at my church. Not a big attendance, but I did sell copies of my new books and others too.

Many writers did Podcasts, but I haven't tried that yet. Mainly because I live in a busy household with three grandkids, not sure where I would do one and if it could happen uninterrupted.

I've had .99 cent sales for older books in my series--the RBPD series and the Deputy Tempe Crabtree mystery series which did well and resulted in people buying other books in the two series. Which is the whole idea of doing this kind of promotion. It takes a lot of work and finding places that don't cost much to help promote.

Though there have been two big book fairs I was invited to participate in, both were far away and meant being away from my husband who needs to have someone to help.

I did attend one conference away from home and my husband stayed with my daughter and husband. Most writing or mystery conferences are not the best for selling books (unless you are a big-name author), but the are a great place to learn new things about writing, what's going on in the writing world and other tidbits. But most of all, it's wonderful to be with other authors. For me, a writing conference lifts my spirits and gives me the incentive to keep on writing.

The Wages of Sloth

I’ll admit I’ve never been much of a go-getter. There are so many more attractive things to do than work; I’d rather do what I want to do (and I’m the only one who feels like that, right?) Fortunately for me, most of the time I want to write; writing is what keeps me as sane as I am, whatever that is. And let’s face it, the insane covid idiocies haven’t helped anything at all!

However, even I was shocked last week when after vowing to get my act - and my desk - cleaned up I found eight (I think) finished manuscripts, needing only covers and ISBNs to release, plus half a dozen novellas which I had planned to make available in paper - not counting the six or seven (can you tell I’m hazy on numbers?) books I have had reverted from trad publishers.... all waiting to be covered and released.

Holy guacamole! I knew there were a couple of releases I should attend to, but I swear these have been multiplying on my hard drive like mushrooms in the dark!

Not that I have been totally remiss - I just put up my very first Vella serial novel (GHOSTS OF BELLE FLEUR - 36 episodes, first three free and releasing today - hint, hint!) and am still hard at work on a non-fic history book to say nothing of having a life, but good grief!

I can see a lot of publishing going on in my future, so be prepared for a release blitz that rivals my first foray into self-publishing in 2014. The Husband is not happy. In 2014 I had gotten back all the books I thought I would ever get returned, so knowing I don’t respond well unless I have a deadline I decided to give myself a strict release deadline. I come from a newspaper/advertising background where there is only one excuse for missing a deadline - death. Yours.

In 2014 I released a book - freshly edited, formatted for ebook and paperback and with a brand new cover - to every major etailer every two weeks from 1 June to 31 October. It almost killed me, and The Husband got so tired of seeing nothing but the top of my head as I bent over the computer he literally kidnapped me for a weekend in Vegas to celebrate my birthday. That was fun, but it made one release day two days late, and my newspaper/advertising blood cringed. Thank Heaven the shade of my father didn’t rise up and haunt me for such egregious behavior! (Actually, that wouldn’t have been so bad - I still miss my dad even after forty plus years and would love to talk to him again, with or without him having a physical body.)

If there is one thing obvious from this little tale, it’s that I like writing. I don’t particularly like the work of self-publishing. But - I like the unholy circus of rewrites, more rewrites, waiting, and pittances for payments less. I do like the control and the money of self-publishing. True, I have never sold as much with selfing as with trad, but I’ve made equal or better money. Hey - I can be bought!

So... for far too long I have lounged around doing fun things like writing, cleaning the house, travel, excavating the library, in other words living a life, and must now buckle down to business. Those books are not going to publish themselves, and I (1) can’t afford to hire some company to do it for me and (2) wouldn’t even if I could because I have become accustomed to the bliss of pure control. Unfortunately, bliss comes at a price. I am prepared to pay it.

After some foot surgery a couple of years ago I had to stay in bed for over a week. The first day was unbearable, but after that I came to like the enforced inactivity - I could feel all virtuous for doing basically what I liked to do - nothing. I even coined a word for it - slothing - and claimed the sloth as my spirit animal. Even though I’m now about to embark on this publishing marathon I’m not giving him up. Sloths are cute. Let’s see if I can teach mine to run.

Do You Ever Read a Wonderful Book and Wonder about Your Own Writing?

This happened to me recently when I was reading Craig Johnson's latest Longmire mystery, Daughter of the Morning Star

It had all the elements I love in a mystery plus so much more. Though it didn't follow the usual mystery pattern, it had a wonderful Native American theme, full of supernatural elements. And Mr. Johnson can write!

I watched all the Longmire TV series, and though I enjoyed it all, it doesn't have the same magic as the books do.

While reading the story I couldn't help but question my own writing. The descriptions in this tale were so wonderful as were all the characterizations. I highly recommend it. What I read made me want to do better.

No matter how old we are we can always learn and use what we've learned in our writing.

My book that is closest in theme to Johnson's latest is Spirit Shapes. And I'm having a .99 cent sale on it from Novermber 15th through the 20th. 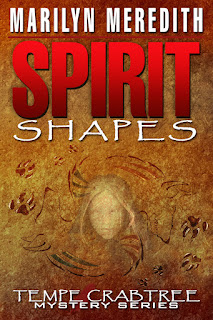