One thing for sure--we humans are good at imagining.
Conclusion: Characters in fiction stories are imagined.

To admit otherwise would (probably) be saying that fiction authors are not always able to tell fact from fiction.

A couple of incidents related to authors I admire only increase this puzzlement. One is Marilyn Meredith, who writes about the people in a fictitious (?) California town's police department, and another series about crime-solving by Deputy Tempe Crabtree--an American Indian who understands the Indian way of seeing the world and its mysteries, but is married to a Christian Minister who challenges his wife's beliefs.  Marilyn's own understanding of all the worlds and ideas that appear in her stories is fed by people she knows, and the area where she lives. I don't know if she ever thinks Tempe or members of the Rocky Bluff Police Department are borderline real, but she has said that she has to continue writing each series because she wants to find out what her characters are doing.

Carolyn Hart, a well-known cozy mystery author,  also writes more than one series, and I have read in several places a report of this conversation: Carolyn's daughter went to her dad and said, "Daddy, Momma thinks those people are real!"  The reply?  "Oh, they are."

And, of course I know Carolyn and Marilyn to be perfectly rational individuals who fit very well into society.

But . . . .  As an author, I also know I have to be "inside the skin" of each character I write into a story. For a time, as I type, I AM Carrie, Henry, or even the villain in a novel. I am thinking as Carrie, the major female protagonist in my "To Die For" series. And, whether the name is Darth Vader, Spock, Pollyanna, or Scout, I suggest, as their creators were typing, they were thinking as those people and had moved inside their worlds. Each of those worlds were locations they knew well inside their imaginations, if not in real life.

More than once I have been told that Carrie is like Radine.  Hunh-unh. She is cleverer, bolder, more perceptive, not to mention more attractive than I am. But I sure enjoy being, at the least, her friend. Also, a number of readers have spoken of Carrie and Henry as if they are real.  So, for a time at least, maybe they are. Perhaps, in our thoughts, they are as real as real as people we knew well who are gone from our human lives.

I am never going to make an attempt to analyze any of this, though others may do so.

What do you think?
Posted by Radine Trees Nehring at Monday, October 30, 2017 2 comments: 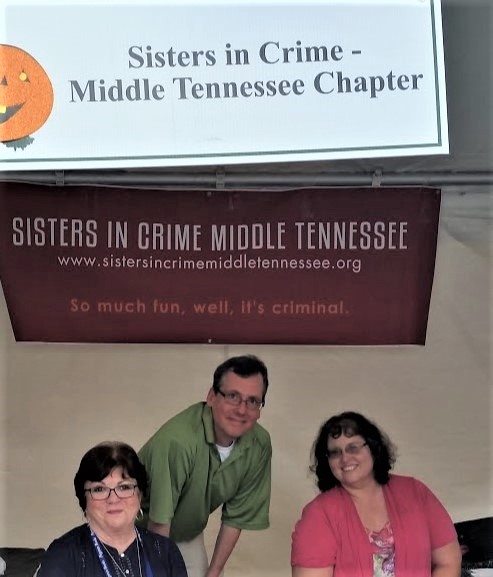 
This is where I hung out on the one day I went to this event this year, Saturday October 14th. New job, so I had to miss Friday and then on Sunday I was just too beat. Next year I'll be there all three days and, if I can get my current work-in-progress published by then, I'll be on one of their author panels again like the past two years.

I've belonged to this local chapter of Sister's in Crime (and we have misters too) right after moving to the area. We arrived late in 2007 and I joined in 2008. This is a spectacular group of readers and writers. I've watched some of the author members from the early years go from debut authors to bestselling authors. Lots of local support for authors here in the Nashville area. We have members who are readers, wannabe authors, and authors. We meet once a month for about an hour and then offer field trips and extra-curricula activities for those interested.

Here are more pictures of this national festival of books held right here in my home town: 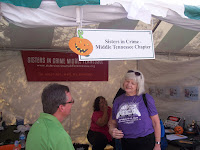 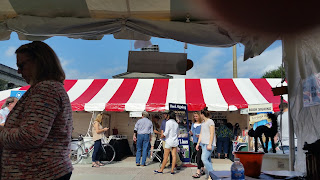 A view inside our booth and then another to the neighboring tent across from us. Then below a walk around the premises and a visit to the booth for the Nashville Writers Meetup Group I also belong to, with Alan Lewis manning the booth. 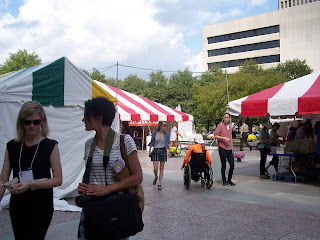 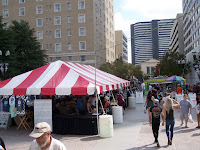 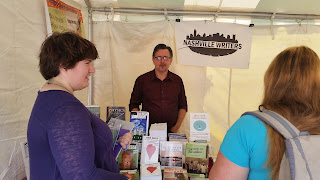 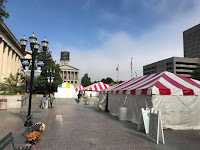 It's funny, but as a writer one of the most consistent reactions I get is "How do you keep all the characters in a whole book straight?"

The non-writers always look at me weirdly as I answer, but usually don't scoff openly unless I tell them that I normally have three or four projects going more or less simultaneously. Then they are absolutely astonished - and again they wonder how I not only keep all the characters straight, but keep all of them in their own books.

Only a few, usually writers, scoff  when I explain. (And I really don't see how they can work on only one project at a time without becoming fatally bored! But - chacun à son goût!) I ask them if they have a job, then if they go to church, then if they have extended family they don't see every day. Most everyone answers yes. Then I ask them if they ever get someone from their extended family mixed up with someone from their church, or their job. Every single time (almost!) they answer "Of course not!" rather indignantly ... then the light begins to dawn behind their eyes. Sometimes it dawns slowly, but it does dawn. Most of the time.

The Husband says I live only half-way in the world of reality, and I guess he's right, because my characters are as real - and sometimes more so - than the biological specimens with whom I interact. Everyone knows that writing is a lonely profession - just the writer and his computer and the stories in his head. Still - I'm never lonely. My characters are always there, and sometimes working alone in an empty office can get very crowded.
Posted by Susan at Wednesday, October 18, 2017 6 comments:

The Mystery is How am I Going to do it All?

Ever wonder if all that you have planned can possibly happen? I'm at that stage right now. 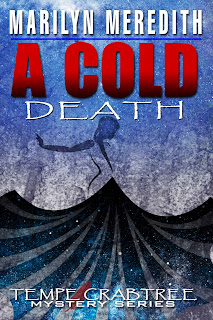 Because I have a new Deputy Tempe Crabtree mystery out, A Cold Death, I've been doing all sorts of things online and in person to promote it. My blog tour is over, and yes, I think it helped, at least the ranking on Kindle because lower numbers during that time period. And I've run another online promotion too. I won't know how well that has worked until I receive a royalty statement from the publisher.

I've had book signings at Barnes and Noble and a wonderful chocolate store. I'll be one of many authors at the Great Valley Book Festival in Manteca this Saturday. Always a fun day.

But--and it's a big one--I also have a re-issue of a very old cookbook--Cooking for a Big Family and a Crowd  as well as a romance with a supernatural touch, Lingering Spirit, and my very first mystery The Astral Gift.

All of this has come about because of a wonderful friend, who decided all the books that had been with my former publisher should be republished. She is also working on two historical family sagas of mine. And of course this means that I have to do a lot of re-editing, but I can assure you I'm not complaining about that.

In the meantime, the Rocky Bluff P.D. mystery I'm working on now is being neglected. What I've decided is that maybe I won't have two books come out next year as usual. There is only so much time.

So authors--have you ever felt like I do at the moment? A bit overwhelmed by all that you need to be doing?

And readers, I hope this give you a bit of an insight about what some of us go through in order to get new books out there. We all hope that the books we write will please readers.

Email ThisBlogThis!Share to TwitterShare to FacebookShare to Pinterest
Labels: A Cold Death--a Deputy Tempe Crabtree mystery, The Mystery is How am I Going to do it All? Marilyn Meredith 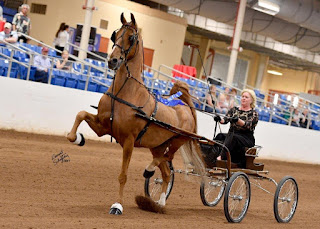 The last few months have been a whirl wind of activity. I’m finishing up with my final edits on Murder on the Vine, and will be releasing it next month. I am revising The Black Madonna to be published in December. I’ve hired an artist to illustrate my children’s book, Clyde, Special in So Many Ways that will be coming out in November.

A collaborative group of people that I am a part of have begun a newsletter for speculative fiction authors at www.speculativefictionwriters, we are looking for people who write short stories, flash fiction, and general help for first time authors.

I have several upcoming book signing events in October, November, and in February and April of next year. I will also be in Las Vegas at a horse show. 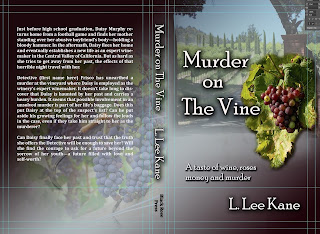 Check out my website at www.lindaleekane.com for more information.
Posted by L Lee Kane at Thursday, October 05, 2017 No comments: