I've neglected this post because of what has been happening in my life.

As many of your know from my Facebook posts, my middle daughter had a life-threatening event which resulted in two stays in the hospital, three sugeries, including open heart surgery.

Whe is home now, but her life has made a big change.

We did so much together, taking many trips to the coast, to Las Vegas to the PSWA convention, and all around our area. She won't be able to drive for 5 to 6 weeks and maybe not even then. She loves to drive.

She loves to shop for bargains which she usually did on her own. That has come to a big halt.

And many of you know, I also have to care for my husband too.

How Has the Covid 19 Affected Your Writing?

I'm wondering because I've seen so many varied reports from writers on Facebook and other places.

Some seem to have given up writing to deep clean their house. I can assure you that hasn't happened to me. Oh, I've thought of it, but that's about as far as I've gotten. I pay a granddaughter to do the floors and other chores that I don't do anymore.

Other writers seem to have used this time when the world as we know it as been put on slow to write like crazy, producing even more than they have before.

For me, it's not the virus that's affected my writing, it's getting writing jobs that have taken up my time. I also have done some promoting by offering the first book in my Deputy Tempe Crabtree series free for 5 days. That paid off in over 600 copies being downloaded, and now people are buying copies of other books in the series--which, of course, was the whole point of the freebie.

I'm more fortunate than many in the fact that I have family living with me, next door, and close by and I still see them all. So, some parts of my life haven't changed.

I am working on a new Rocky Bluff P.D. mystery and I'm anxious to get back to it and finish.

I've lamented all the in-person book events that have been cancelled--but lo and behold, I have two events coming up--a holiday boutique being held at the nearby art gallery--masks to be worn by all, and another event that hasn't quite been firmed up as yet.

Because I want people to know when I'm smiling, I purchased clear full face masks to wear.

So, tell me, how has this nasty virus affected you and your writing?

You can take a peek at all my books at my website: http://fictionforyou.com/

Email ThisBlogThis!Share to TwitterShare to FacebookShare to Pinterest
Labels: cleaning house, How has Corona Virus Affected You as a Writer?, staying home, writing more

by Janis Susan May

There are techniques to prime the pump, of course, and everyone has their own favorites. One way that has been around for decades - but is fairly new to me - is the book-in-a-week self-accountability writing, an offshoot of the book-in-a-month phenomenon.

Once a month one of my writing groups sponsors a book-in-a-week event. That is not a totally accurate name, though we call it that. We don’t expect anyone to write an entire book in a week. We do, however, expect all of us to write. On the first day we each declare how many words we are going to do in the next seven days. This can range from 500 to 10,000 or more. Each evening we email the group our numbers for that day and at the end of the week the coordinator posts a spreadsheet with each individual’s and the group’s totals. There are no prizes for those who make or exceed their goals and no reprisals for those who don’t. It’s completely voluntary and self-reported. There’s no real competition except against yourself.

Simple, right? Yes, it is, but then the simple things are often the most powerful.

Thanks to the restrictions and general malaise of this dratted lingering plague I have had trouble writing. I have been a professional writer of some kind for nearly all my adult life (and, no, I am not going to say how long!) and writing is what I do, no matter if I feel like it or not. Deadlines are deadlines and must be met no matter what else is going on at the time. This plague changed that. I don’t know if it’s simply accidie, or being affected by some malign mental atmosphere permeating the country, or the simple laziness of age. Whatever it is, I have had trouble writing.

I joined the BiaW challenge more out of curiosity than from any hope of help, but it works. I began with a goal of 5,000 words for a week. Normally this would be a laughably low weekly count for me, but one I had not made for several weeks. Just the public declaration that I would do 5,000 in a week stiffened my writing spine and I exceeded my goal. One challenge I didn’t make it, but that particular slice of time contained several family problems. Every other challenge I have more than exceeded my goal - sometimes even doubling it.

So, in my case at least, simple works. Just the act of stating that I am going to write X number of words in Y length of time makes it real. Announcing it publicly makes it real. However it works, for me at least it does work. If you’re having trouble getting the words down, you might try an accountability group.

Email ThisBlogThis!Share to TwitterShare to FacebookShare to Pinterest
Labels: accountability, book in a month, book in a week, challenge writing, writers block 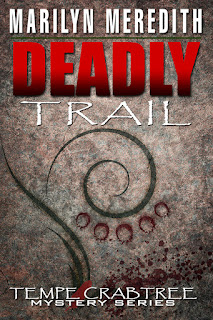 From yesterday, October 12, until Friday, Oct. 16, the first book in the Deputy Tempe Crabtree mystery series will be free on Kindle.
https://www.amazon.com/Deadly-Trail-Tempe-Crabtree-Mysteries-ebook/dp/B07R7XF4L9/ref=sr_1_1?dchild=1&keywords=Deadly+Trail+by+marilyn+meredith&qid=1601992913&s=digital-text&sr=1-1
This is the newly edited, republished edition--the book that started it all, Deadly Trail.
Actually, the second book in the series, Deadly Omen,  was published first. I found another small press to publish Deadly Trail, but it never got much in the way of promotion.
The series has now grown to 19 books.
Deadly Trail introduces Native American Deputy Tempe Crabtree, her son, Blair, and her fiance, Pastor Hutch Hutchinson. Nick Two John is an important character in this book as he is in most of those that follow.
The story is set in the mountain community of Bear Creek that has a striking resemblance to the town I live in, with some necessary changes.
This is a great way to start the series, and I hope some of you will try it.
Marilyn
Posted by Marilyn Meredith a.k.a. F. M. Meredith at Tuesday, October 13, 2020 4 comments: