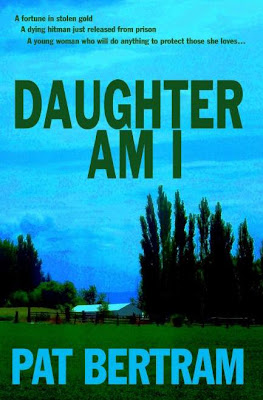 Please join me in welcoming Pat Bertram to Make Mine Mystery! Pat has published three novels and leads regular lively writing and publishing discussions on Facebook and Gather.com. I'm delighted to have her as a guest today, and not only because she has done my work for me. :-) Thank you, Pat!

First, a quick blurb on her latest novel, DAUGHTER AM I.


"When twenty-five-year-old Mary Stuart learns she inherited a farm from her recently murdered grandparents-grandparents her father claimed had died before she was born-she becomes obsessed with finding out who they were and why someone wanted them dead. Along the way she accumulates a crew of feisty octogenarians-former gangsters and friends of her grandfather. She meets and falls in love Tim Olson, whose grandfather shared a deadly secret with her great-grandfather. Now Mary and Tim need to stay one step ahead of the killer who is desperate to dig up that secret."


And now, without further ado, Pat Bertram on the subject of humor in fiction!


Alfred Hitchcock is often referred to as the master of suspense, but I find his movies dreary. The tension rises at a leisurely pace and there is nothing to relieve the single grey note of suspense. By the time I am halfway through one of his films, I hope that everyone dies and gets it over with.

For me, the problem with his movies is that he has no discernable sense of humor. A bit of comic relief would give the films color, would make the suspense more surprising by comparison and the revelations more shocking. Anyone who is familiar with color knows that this works. Yellow is brighter in the presence of purple, its direct opposite on the color wheel, than in the presence of any other color, and purple is more vibrant in the presence of yellow.

I am trying to cultivate humor so that I don't turn out to be a single-grey-note writer. I'm not planning to add slapstick to an otherwise serious story; nor am I planning to use a lot of clever quips and one-liners. They get annoying after a while, and overshadow the plot. A touch of quiet humor works just as well and makes readers (or film watchers) let down their guard so they are more susceptible to deadly thrusts.

There are many ways of being humorous. One can juxtapose different character types as I did in Daughter Am I. I did not intend for the book to be humorous, but parts of it ended up that way because of Mary's relationship with the old gangsters. The humor did not come from the age difference but from value differences. The old gangsters had no problem breaking the law, and Mary did.

One can also have a character say or do the opposite of what is expected. The classic Lou Grant remark from Mary Tyler Moore is a good example: "You've got spunk," a pause, then, "I hate spunk." Or one can have a character struggle to come up with a witty remark and finally come out with a simple "Hi."

Humor does not come naturally to me, but then, even funny people have to work at it. Maybe a bit of humor will make my characters more lovable. It will certainly make writing them more fun. At the very least, they (and my books) will not be colorless.

Pat Bertram is a native of Colorado and a lifelong resident. When the traditional publishers stopped publishing her favorite type of book — character and story driven novels that can’t easily be slotted into a genre — she decided to write her own. Bertram is the author of Daughter Am I, More Deaths Than One, and A Spark of Heavenly Fire. All are available from Second Wind Publishing.

Hi, Pat, and welcome to Make Mine Mystery! Sorry about the formatting -glitches - I've been away from computer contact since yesterday morning and just got home.

I need to watch The Birds again and some other Hitchcock films to see about the humor content or lack therof...

Thank you for having me as a guest, Dana. It's great to be here.

Some people have told me that there is humor in some of Hitchcock's movies. If so, it is so subtle as to be beyond me.

I haven't watched Hitchcock in years, but my favorite is the 39 Steps and Strangers on a Train. Though now that you say it, no. There is no humor. Maybe in his early English ones, but it's English humor and I don't get it. But I do like this way of telling a story.

Goos ideas with the contrast. I don't write straight mysteries (more romantic mysteries) but it's a good point no matter. I'll keep it in mind, thanks!

Isabel, there are so many different point to keep in mind when writing, that it's amazing any of us manage to write anything! Good thing we can always rewrite.

Ryan, thank you for stopping by. Where would mystery writers be without myster readers!

North by Northwest has humor in it, but that might partly be due to the presence of Cary Grant. That said, I know what you're driving at here when you talk about a book or a movie being all grey.

The humor works well in "Daughter Am I" because it arises naturally out of the plot and the interactions between characters. We know after a while that Mary knows better than to say she wants or needs anything because, before she can stop them, the elder con men will bust into some place and get it for her.

I was going to mention North by Northwest -- it's got a lot of humor in it. I do agree that suspense is better leavened with humor!

Congratulations on DAUGHTER -- looking forward to reading it!

Hi, Malcolm! Have I ever told you what a joy it is to talk to someone who has read my books? I am looking forward to our discussion tomorrow.

Lisa, thank you! And thank you for stopping by and lending moral support (though I haven't really needed it, Dana is treating me well).

As for North by Northwest -- does it have humor? I can't remember it -- I just remember wishing they'd catch Cary Grant and put me out of my misery. (I'm not a big Hitchock fan. Can you tell?)

I like the idea of humor to break up tension or even to liven up something that needs a jolt. The same thing could be done by adding an element of danger or a moment of suspense. Changing the dynamic is good any time.

I agree, a bit of humour does help with suspense in books and movies.

For anyone looking for humour in Hitchcock, might I suggest The Trouble with Harry. It is a black comedy and very entertaining.

The Trouble with Harry was Hitchcock? You're right, that was really funny. Very enjoyable. Maybe as time went on he realized he needed more humor? *Shrug*

I don't know if it is the humor in North by Northwest or Cary Grant that makes it a total win. That and the utterly salacious conversation in the train between the two protags -- genius in getting things by the censors. Whew! Talk about innuendos.

Suspense is a dish that can be flavored differently, and like food, I like variety. Pat your inherent moral conflict between the generations is perfect for playing against each other. The premises sounds intriguing and entertaining.

Hi, Pat! Great guest blog. I'm dropping in to let you know I've got this linked over at Win a Book. Hope it brings you more fans!

I couldn't agree with you more, Pat. Even my nonfiction books contain humor. I think it endears the reader to your characters and keeps them reading.

North By Northwest...that's the one I remember as having humor! ANd James Mason...

Hello, Pat! I have found there to be just the right amount of humor to your books. A bit here and there to lighten the mood--and only when appropriate. Keep up the excellent work and best of luck with DAUGHTER AM I.

Hi Dana, great blog and great guest blog Pat. I really enjoy your take on things. Hitchcock's humor if it was visible was very British. I loved All About Harry, it's one of my all-time favs.

I'm waiting for my copy of DAI to show up. I love your genre... I call it a Bertam. You look at the effect of world wide problems from the viewpoint of the 'common man." I adored A Spark of Heavenly Fire and loved More Deaths Than One. Soon I'll have a shelf full of Bertrams!

Have a great time with this release!

I'm thrilled -- and touched -- that so many people showed up to welcome me as a guest on Make Mine Mystery!

A.F. -- I knew someone would find enough humor in Hitchcock to knock me off my soapbox! The humor that I favor in suspense is more like the humor in the television series "Burn Notice." Those writers know how to keep watchers watching.

Isabel, I bet you're right that as time went on he realized he needed more humor. Or perhaps he just wanted to try something different?

VA, I was lucky -- I had two different conflicts to play with: the generational one and the moral one. Poor Mary has never even gotten a speeding ticket, and all of a sudden she finds herself in with a gang of aged reprobates. The humor came naturally, even though I do not naturally write humor.

Hi, Susan! Thank you so much for posting the link at win a book! What a great idea for a blog!

Jean -- definitely. A touch of humor makes a character come alive just as a touch of white in a painting of an eye makes it seem alive.

Hi, Deborah! I meant to invite you here today, but I hadn't yet gotten a chance. I'm glad you found your own way. I'm pleased that the humor worked. Despite the humor, Daughter Am I has a serious message. I just wish I knew what it was!

Wanda, how wonderful that you stopped by! I love that you collect "Bertrams." Just think, maybe someday future students (poor things) will be studying this new genre, and it will be your doing! I'll be interested to know what you think of Daughter Am I. It's the most "normal" of all my books.

Reminds me of how people have the tendencey to laugh at the worst possible times, when they're not supposed to. It has to be because the tension needs to be released somehow.

Good interview. Nice to learn more about you, Pat.

Hi Pat. Hitchcock's late movie Frenzy included black humor, a rather different direction for him as you say. Writing humor is a challenge, but would change the experience for the reader.

I'm sorry I can't disagree with you. I think humor adds to the story whether its a mystery or even a horror/thriller.

I'm glad I came back to if anything was going on -- so many more comments! Thank you everyone for giving me such a great start to my blog tour, and for giving me a new perspective on Hitchcock.

Thank you again, Dana, for inviting me. It was a real joy being here on Make Mine Murder.