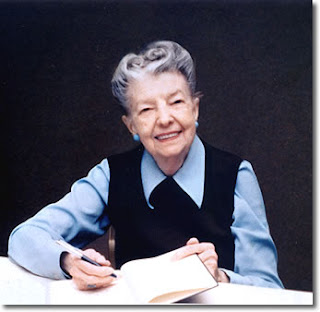 Since another icon of the mystery genre has left our world, I decided to honor some of the mystery writing heroes who directly or indirectly affected my writing: Phyllis A. Whitney; Mary Stewart; Tony Hillerman; and Robert B. Parker. Three have died, and one still lives but no longer writes.

Phyllis A. Whitney passed away on February 8, 2008 at the age of 104. For more than 80 years, she wove her storytelling magic — in her lifetime garnering numerous awards and worldwide acclaim for her books. A winner of the prestigious Grand Master award for lifetime achievement from the Mystery Writers of America, and an author the New York Times once called the "Queen of the American Gothics," Phyllis A. Whitney was and remains one of my favorite mystery and romantic suspense writers. Reading her books during my teens and adult years had an impact on my writing.

"It's hard to come up with a 'quote' about myself. Perhaps I could say that most of my writing has been concerned with understanding between people. Whether of different races, or religions, or even in the same family I tried in my books... to deal with the subject of understanding the other fellow."
-- Phyllis A. Whitney

Mary Stewart published about one book a year from 1955 until 1980, each becoming a best seller. She was at the height of her popularity in the 1960s and 1970s when many of her suspense and romantic novels were translated into many languages. I read every one of her books I could lay hands on during the same years I read Phyllis Whitney's.

Stewart is considered one of the founders of the romantic suspense sub-genre, blending romance novels and mystery. The author has lived for many years in Scotland, where she divides her time between Edinburgh and the West Highlands.

Mary Stewart has always been hesitant to categorize her novels, uncomfortable naming them thrillers, mysteries, or romances. She says, "I'd rather just say that I write novels, fast-moving stories that entertain. To my mind there are really only two kinds of novels, badly written and well written. Beyond that, you cannot categorize...Can't I say that I just write stories? 'Storyteller' is an old and honorable title, and I'd like to lay claim to it."

Anthony "Tony" Grove Hillerman was born on 27 May 1925, the youngest of the three children of August Alfred and Lucy Grove Hillerman. The Hillermans farmed and ran the crossroads store in Sacred Heart, Oklahoma. Even though Tony was originally from Oklahoma, I never had the opportunity to meet him in person until the Red Dirt Book Festival, October 2003, in Shawnee, Oklahoma. I attended all his sessions, stood in line to get my books autographed, and listened as he spoke at the banquet. Several times he visited with me during the course of the two-day festival. A friendly and gracious man, he signed one of my books with a personal message, giving me a keepsake that I will forever treasure.

One thing he shared with us that weekend, some people around him in the publishing business considered him a prude because he didn’t include sexual scenes. One person told him the closest he came to sexual tension was to have a man and woman shake hands.

Many people have written about Tony over the years, and since his death, but one article that best explains his books is an article by the author himself: “Behind the Books” by Tony Hillerman. I advise anyone and everyone read that essay.

Then earlier this week, the world learned we lost another leading mystery writer: Robert B. Parker. I blogged about him on Brain Cells & Bubble Wrap Tuesday, right after I heard about his death.

Robert Parker revitalized and brought life back to the hard-boiled mysteries. I've read most his books, and I enjoyed some more than others. I'm a fan of Spenser (loved Hawk) and Jesse Stone, and always will be.

Yes, we still have some marvelous models to follow as we write mysteries, such as Carolyn Hart, Jordan Dane, Tess Gerritsen, William Bernhardt, and many more, but those we've lost will remain as pioneers in our craft.

Phyllis A. Whitney and Mary Stewart were some of the first who got me hooked on romantic suspense.

I started reading Phyllis Whitney when I was 10 or so I think. Loved her juvenile mysteries and then graduated on to her gothic adult books. Mary Stewart was also one of my favorites. Tony Hillerman introduced me to the Southwest and the Four Corners region. Thanks for the memories!

Hillerman was a master of the gripping beginning. He also had the the nastiest, most compelling villains.

We are often influenced by others, whether we realize it or not. These four had an effect on my writing, which I never realized until recently.

Tony Hillerman certainly influenced me since I fell in love with his Indian heroes long ago and of course now I write about a Native American female deputy with ties to an Indian reservation.

I too read Phyllis Whitney and Mary Stewart--and of course Robert Parker.