Avoid the Mistakes I Made

That was the title of a presentation I made to the Public Safety Writers Association's recent conference. Here are some of them I told about.

I wrote at least three books, sent them out, they were rejected, and I threw the manuscripts away. No computers back then, so no way to even try to retrieve them. They probably weren't much good, but I could've made them better.  Never throw anything you've written away.

I should have learned more about the craft of writing. I didn't. Just because you can write, doesn't mean you can write book. Keep on learning. Read books and magazines on the writing craft, go to writing conferences, join a good critique group.

I had no clue about promotion when my first book came out and gave away my free copies to relatives and friends. No excuse nowadays not to know about promotion. If you expect your books to sell, you better learn about promotion and spend a lot of time on it no matter who your publisher is

Back when I began, there was little technology and no Interent. Use technology effectively. At the very least you should have a website and/or blog, use Facebook and Twitter and other such sites that you enjoy, do in-person events and have business cards with you book information on them to hand out to everyon.e

Never pay a publisher to do anything--in the beginning I paid for what was called co-publishing. Two crooks--first one gambled away all the money he made and ended up in jail. Second one published 50 copies of my book and then disappeared.

(Yes, you will have to pay to buy copies of your books for you to sell, but should be at a discount.)

I've had three publishers quit and two die. (Not much you can do about either.)

Another publisher had 3 of my books and never paid me a single royalty. When I finally got around to questioning him, he sent me $40. Said he hadn't kept track. Never wait as long as I did to find out what's going on.

And yes, before you ask, I did have several agents along the way. None ever connected me with a publisher.

Be sure your contracts have a clause for getting your rights back in a reasonable amount of time.

One thing you should pay for if your publisher doesn't have an in-house editor, is editing.

Sometimes a small publisher might ask for authors to share in the cost of a booth at a big book fair--then it's up to your whether or not you choose to participate.

That's only a small sample of the mistakes I've made. Hope they'll help someone from not making the same one. 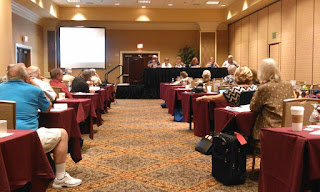 This was the conference room, long and narrow with about 4 seats at each table. Fifty people attended.
Posted by Marilyn Meredith a.k.a. F. M. Meredith at Tuesday, August 04, 2015

Email ThisBlogThis!Share to TwitterShare to FacebookShare to Pinterest
Labels: Avoid the mistakes I made, crooks, Marilyn Meredith, publishing

Great advice for newbies, and also those who've been writing for a while, but have forgotten what to do!