Fedoras and Ferragamos: The Color of Noir

Kathleen Kaska
I love the word “noir.” I like the way it sounds as it rolls off the tongue; the way it looks on paper, demanding bold, black print. If a mystery is classified as noir, I’ll read it; a movie billed as noir, I’ll watch it. But what exactly is noir? The word has become trendy. The color of my mascara is “black noir,” the shade of shoe polish I use on my boots is also “black noir.” Redundant, but understandable, since the word means,“black” in French. For me, it conjures up images of women in stilettos and men in fedoras. But as a literary adjective, what does it really mean? 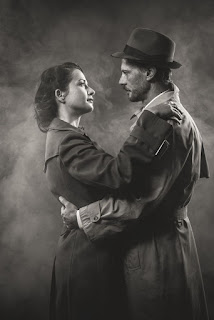 A Google search, resulted in these colorful definitions and cheeky delineations:
“A genre of crime film or fiction characterized by cynicism, fatalism, and moral ambiguity.”
“Crime noir are stories of people who decide to cross an invisible but palpable moral line.”
My favorite comes from the online Merriam-Webster dictionary; “Crime fiction featuring hard-boiled cynical characters and bleak sleazy settings.”
I’m working on a new mystery series that fits the noir subgenre. It takes place in the mid-forties in New York City. My protagonist is a hard-boiled detective, a cynic who’s suffering from PTS, a guy with a vigilante streak who’s pissed off by what life has dished out. He lives in a sleazy apartment building, in a sleazy neighborhood, and frequents sleazy bars. He has a degree in classic literature. What? Where did that come from?
Ted Kendrick has another side, making this “crossing over that moral line,” palpable. He’s fallen on hard times, and his anger takes him to the edge of who-the-hell-cares. He puts himself in situations that threaten to destroy and sabotage what little success he’s manage to achieve; there’s the fatalism. He hopes for the good life he had before things came crashing down, but feels it’s unattainable; hence the ambiguity.
I’m still learning about this fellow even through he’s been brewing in my brain for most of my adult life. And as I write these mysteries, I think he’ll teach me a lot more about what “noir” really means.
Posted by Kathleen Kaska at Saturday, August 29, 2015

This was especially interesting to me because I just had a conversation with another author on this subject in the past two days. She'd asked me if I minded being associated with "noir." I had no idea what she meant or why I should mind the association. Then she explained it to me. Even though my book is sort of a "cozy," I don't mind any association with noir at all. She explained it some and you've gone into greater detail. Thank you.

I have an idea who that other author might be. I do love noir, too, Kathleen. Love to read it, love to write it. I get into certain moods where the only music I want is the full out wailin' blues. But other times, I need something light, the fluffier the better. That's what I pick up a Maeve Binchy or a cozy mystery writer. Love to write cozy, too. OK, I love being a writer. It's fun being all over the map--hope your noir 40s project is a huge hit!

I like the word too. As for genres, you can break each one down so many ways such as food cozies, handcraft cozies, etc. I've even have people call my books police procedural cozies.

Thank you Linda, Kaye, and Marilyn for commenting. We lost power for twelve hours yesterday because of a windstorm, and I just now fired up the laptop.
Linda, I glad the explanation helped. It's one of you ambiguous words, but I love it.
Thanks, Kaye. Noir is a nice balance for me too, since my other series is a humorous, light cozy.
Marilyn, police procedural cozies: I like it.