Life of a Mobster's Daughter
by Janet Elizabeth Lynn

While researching 1955 Las Vegas for our book DESERT ICE,
I had the opportunity to interview the daughter of a mob king who grew up in 1950s Vegas. "Amy" is a charming lady, 75 years old now, but looks closer to late 50s.
As we spoke, I couldn't help but compare her life with mine, we are about the same age but I grew up in rural Long Island, New York. She rode her bike to school, to the post office, parks etc. as I did. Her mother was very involved with her and her sister even having matching summer dresses made for the three of them. 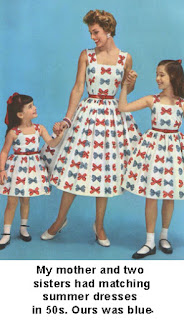 I remember our mother daughter dresses had blue flowers on them with blue lace around the neck. She said theirs were yellow with white lace.

My father left for work every morning, hers left for the casino every morning. Neither one of us knew or cared at the time what our fathers did, they just came home every night. Amy remembers ordering her first pair of high heels at Sears, I bought mine at Penny's.


She then talked about her house:  a kitchen, small dining room and a large dining room for parties. That's where we differed. 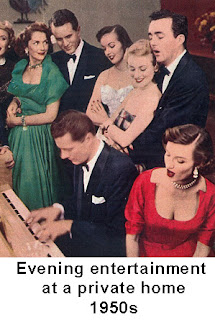 "You see, every night we had famous people over for dinner and afterward they entertained us."


She was talking about Sammy Davis, Jr., Pearl Bailey and her brother Bill, Frank Sinatra, etc. Hence the rule of the house was everyone had to dress for dinner.

Amy called her evening wear "After 5 Dresses". Her mother made sure her was hair done perfectly for dinner, every night.

She explained that 1955 Las Vegas was heavily segregated. People of color were not allowed to use the main entrance of the hotels, stay in hotels, or frequent casinos or shows. This included performers. So they were allowed to perform, but not leave through the main entrance.

"My dad felt badly about this so he built several small bungalows around our pool area and let them stay there and dine with our family. Otherwise they would have to stay in rooming houses."
I asked her if she knew her father was a mob king and if there were any precautions taken for her or her family's security.
She smiled, "You have to understand, Las Vegas was a sleepily little town. Everyone knew we were his family yet I went to school with the locals, played with the local kids at the playground and went to their birthday parties. I just knew he was my dad and he came home every night."
"It wasn't until I got older that I noticed the attention dad and mom were getting, and the press hounding our house and us. That's how I knew something was different. Then my sister and I were sent to college in the north."
We ended the 20 minute interview with a promise of a signed copy of our book.
On the way back to our hotel my husband and I talked and realized that the mobsters owned illegal businesses and were considered criminals, but the minute they set foot in Las Vegas, they were legitimate businessmen. And very successful ones at that.
This interview gave me a real feel for 1955 Las Vegas and most important, where to dump bodies, car chases and most of all, where my character would eat. After all it was Las Vegas.

For more, here's a link to Janet and her husband,
Will's book, Desert Ice, set in Las Vegas in the 50s - http://didrake.blogspot.com/

One of the questions I asked "Amy" was which big name guest did you enjoy the most when they visited. She thought for a moment, "Mickey Cohen." I had to think for a minutes who he was, not an actor, singer or entertainer. So who? He was a mobster in Los Angeles, friends with Bugsy Siegel and Al Capone. Reseaching his life he was quite a character. Yet Amy felt he was warm, fun to be with and a real nice guy. Interesting!

I suppose we don't think of a mobster as having a family that sat around the supper table every night. But then, there were the Sopranos and others like them on tv.
The fifties--my decade when I became an adult. I remember a lot about that decade..but in a little quiet West Texas town?....not a mobster in sight, and no tv for most of us.
Interesting post..and yes, love the photos.

I found this fascinating and, like Celia, I love the vintage dress pictures. I grew up in an area where the local sheriff controlled gambling, the clip joints, and even the cat house. It was something of a surprise to find out that this wasn't the norm!

this was fascinating. Love the pictures. Lots of old stories from Vegas.

I remember the 50s well as a child, but then later as a teenager and then a young adult with all those "reminder" old movie reruns and news reports. I think I learned more about the 50s in the 60s. TV was black and white. Mostly the men worked in families. It was a different time. The book sounds good.

Wow. Fun stuff. I always love how it turns out that "history" isn't really about dates and who did what, but the stories of real people who had real lives - either normal or otherwise. Thanks, Janet, for an awesome post.

I grew up in Long Island, New York and were one of the first in the neighborhood that had a TV, black and white of course. In 1955, I remember the TV show December Brine and Cheyenne and ofcourse The Mickey Mouse Club. Since our book takes place during this time we looked back at the tv shows airing that year and used them in the books. He also listens to the radio while driving and hears such songs as Love is a Many Splender Thing, 16 Tons, etc. Also the juke boxes at the diners. Writing this series has been a wonderful waltz down memory lane.