Panels - The Fun Side of Being an Author

Writing can be hard work, author promotion laborious and grueling, and as far as making money, well, that seems to be the biggest challenge for most of us. Do we give up? No. We enjoy writing and much that goes with being an author is just pure fun. Author panels are one of the more uplifting things we participate in.

Four weeks ago, I was at the Killer Nashville International Writers Conference, sitting on a panel. Two days later, still at the conference, I was sitting on a second panel. 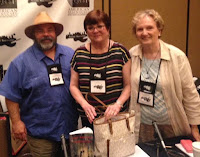 I could go on and on for hours talking about the Killer Nashville Conference with all their panels, writers’ sessions, workshops, and more.

For years before I was published, I went to every author event I could make hoping to learn how to become an author. How I envied the authors who spoke at sessions or with a group. I usually joined in when it was time for audience participation, something I did in preparation for the day when I too would be a speaker or panelist.

The first official panel I participated in was at the Southern Festival of Books in mid-October 2015 here in Nashville, Tennessee. The panel was called: “Who Can You Trust – Three Mysteries.” The other authors with me were Phyllis Gobbell and Elise Blackwell. Our moderator did a great job injecting some “umph” into this presentation. As you can see I was in my glory. 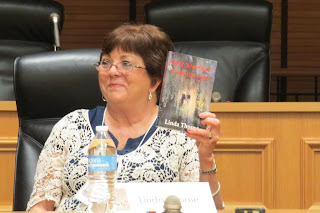 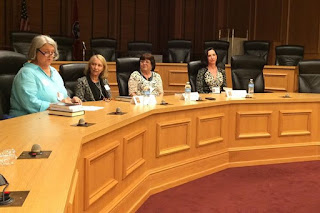 The Killer Nashville conference, always held in August, was moved temporarily to late-October in 2015 and I took part in their panel called "Debut Authors".

In 2016, The Southern Festival of books invited me to be part of a panel of authors for a second year. I joined Kelly Oliver and Jaden (Beth) Terrell to talk on "On the Case: Private Eye Series." To get on another such group with this Festival will not happen again until I publish a new book. 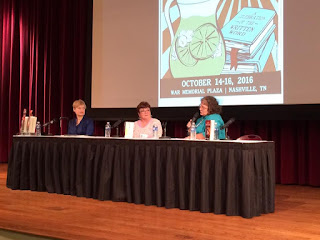 But I'm still invited to other panels even without a new publication. I appeared on a non- traditional rotating panel at Bouchercon 2016 in New Orleans, I've been on ones at bookstores, and, of course, Killer Nashville year after year.

Author panels are handled pretty much the same where ever you find them. They primarily provide new or midlist authors an opportunity to reach a small group of book-buyers, but best-selling authors appear on them too. I’ve been on panels with bestsellers. I’ve also gone to panels where the “big-huge-names” in the writing world participated.

If you’re going to be part of a panel of authors, my advice is never worry about what to say. If you’ve written a book, you’ll know it inside out and backwards. There’s no way to be blindsided by a question. Most of your answers will come out naturally with enthusiasm because you are talking about your work of love. If you wind up on a panel with a talker, don’t worry about how to handle it. I’ve had it happen and the moderator is usually an expert on cutting that talk short. If not, I’ve butted in myself. It’s easy to interrupt and make a couple of comments to pull the talker back into the rhythm of the group.


Posted by authorlindathorne at Friday, September 21, 2018

Email ThisBlogThis!Share to TwitterShare to FacebookShare to Pinterest
Labels: A Promotion to Die For, Judy Kenagy mystery series, Just Another Termination, Linda Thorne, Make Mine Mystery - Panels - The Fun Side of Being an Author

I love being on panels. I learned long ago if I made people laugh, I'd probably sell books. Panel hogs are the worst--I'm good at shutting them up when I"m the moderator. Once long ago, though, the moderator didn't let anyone say anything. The panel was on promotion and she told about what she was doing and we never had a chance.

I enjoy being on panels, and I have mild trepidation when I'm the moderator. I want to make sure the panel is interesting, and the panelists get equal time. The panel/microphone hog is the worst, but we have to learn to deal with this. I'm getting better at it, taking cues from other moderators who do a good job. I've been on panels wit the mic hog, so I know how it feels and that makes it easier for me to take back the mic. Good post on a timely topic.

Interesting comments. I now have a new term to use when appropriate: panel hog or panel/mic hog. That must've been horrible, Marilyn, to be on one where the moderator stole everyone else's time. I haven't seen that one pulled and I sure hopes it's rarity.

I used to participate on panels and did enjoy the experience.
I liked the feeling of safety in numbers.

I agree with you. Writing work is difficult. Therefore, you need to choose a job to your liking. If you really like writing, you can work as a writer on resources like Vip-Writers.