Over the last two months, I tried two different types of promotion.

The first was offering one of my books in the Rocky Bluff P.D. series free for Kindle. This one attracted the most takers, and resulted in people buy other books in the series--which of course is the reason for doing this.

The second was offering one of the books in my Deputy Tempe Crabtree series for .99 cents. 51 copies were purchased and soon after 3 of each of two other titles, and 2 copies of three others, and one copy of others.

And as usual, my cookbook, "Cooking for a Big Family and a Crowd" is my best seller for Kindle and in paper.

Though I haven't really done any promotion yet for the latest and last of my Rocky Bluff P.D. series, two Kindle copies have been purchased (and more since I wrote this.)

My big promotion for Reversal of Fortune isn't going to happen until June. Why? Because I have too many other things I have to take care of first.

Oh, I"ll probably mention some things about it on this blog, maybe when my turn comes again. We'll see. 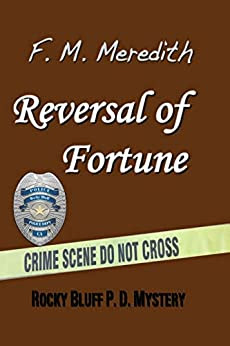 It's following the same theme of all the other covers in the series.
Marilyn, who wrote this series as F. M. Meredith

It's great that you have a series going. Then your freebies can get readers to binge the rest of the series!

Yes, it has worked out well.