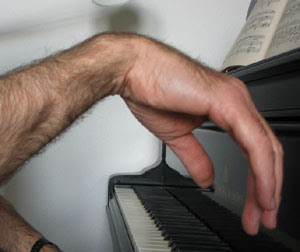 No, this note is not about a casual evening stroll along the walk on Venice Beach, nor is it about San Francisco culture. And it’s not about a punk rock band either, although I understand there’s one with the name “Limp Wrist.”

No, I’m talking about a shooting phenomenon which affects every shooter, which I’ve yet to see affect any protagonist or antagonist using a gun. The term “Limp Wrist,” is a verb. It’s the failure to grip your automatic handgun tightly enough, causing the pistol to fail to extract a spent casing from the chamber.

A semi-automatic pistol fired with a limp wrist will either not fire at all, or if it does fire, it will not cycle for a second shot. In other words, you either have a weapon that will not fire, or you’ve got a jammed gun.

Oops. That can get your character killed.

In order to fire, semi-autos need a stable base. Wasn’t it Einstein who decreed, “Every action has an equal and opposite reaction?”

Well, Einstein was right. If you were to suspend a pistol in the air and pull the trigger by string, the bullet would fly, but so would the gun… in the opposite direction. And the semi-auto would fail to cycle because the resistance it needs to move the slide back and eject and feed has been removed. That means a jam that can only be cleared by removing the magazine and racking the slide.

Limp wristing happens to the strongest people; indeed, it happens to everybody. Often when a character is moving or distracted or panicked, he’s more focused on his target and what he’s doing than on how he’s holding his gun. Maybe the protag or perp is leading a victim, or ducking and dodging. A momentary lapse, and the grip on the pistol loosens.

Many modern semi-auto pistols, such as high end 1911s or the new Springfield XD series, have wrist safeties, which will not permit the pistol to fire is being held with less than a firm grip. See the picture on the right. 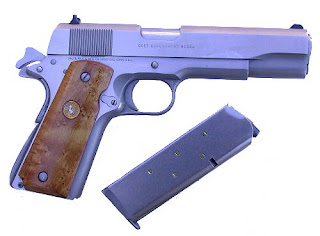 The short but distinct separation at the upper end of the grip under the beaver tail, is the grip safety. This safety arm must be depressed before the gun will fire. Look at the structure. The grip safety is at the top of the grip, meaning the upper part of the shooting hand is what depresses the safety. So a firm grip with the bottom part of the hand is irrelevant, at least relating to operation of the grip safety. With pistols containing this safety, limp wristing will mean a failure to fire.

On semi-autos without a grip safety, as for instance with Glock, HK or Sig Sauer Classic or Sig Pro pistols, a soft grip will fire the pistol but cause it to fail to eject, thereby jamming the gun and preventing a second or follow-on shot until the pistol is cleared.

In many of our books, we see characters shooting under stress. And stress is one of the causes of limp wristing, because stress causes the shooter to focus on something other than a firm pistol grip. It’s not about strength, not a gender factor at all; it’s about distraction. If the character has been wrestling with someone for the gun and the gun goes off, odds are the shot was limp wristed, so the gun will be jammed. And of course, if it was one of those guns with a grip safety, the first shot wouldn’t have fired at all.

In most of these situations, the author will have someone (the perp, the protag, or a third character) grab the pistol and struggle to fire, in a hurry, probably with a bad grip.

When, if ever, are we shown the gun jamming in this scenario? Yet, that’s what would likely happen. And the jam is the more critical of these issues because the pistol must be cleared before it will shoot again. With a wrist safety, the gun didn’t fire, so there’s no jam. A firm grip = Bang.

So, beware the dangers of the limp wrist. Or use a limp wristed shot (or non-shot as the case may be) for a little more drama and realism in your story.
Posted by Unknown at Saturday, January 10, 2009

Ben: You are correct. "Limp wristing" is a real phenomena but in my many years of law enforcement and handling/shooting handguns I've found it to be most common in small semi-automatic pistols in the more marginal calibers. A few years ago I bought my wife a Beretta Tomcat .32 auto pistol as a nightstand gun for personal defense. When we went out to the range for her training, the gun continually jammed on her and it was absolutely from limp wristing the weapon. The other problem was the little gun had such a stiff action she couldn't pull the slide back to cycle a round into the chamber. True, this pistol has a "tip up" barrel which allows you to manually load the first round without pulling the receiver slide back but just the fact that the gun jammed every eight or ten rounds on her at the range made her lose confidence and she no longer "liked" it. Santa solved the problem this Christmas when he put a brand new Taurus Ultra-Lite nine shot stainless steel 2" .22 revolver under the tree for her. No more limp wristing, and she has absolute confidence in this gun because she can visually see that it's loaded and knows to a certainty that every time she pulls the trigger it is going to go "bang." And don't even get me started on the old "A .22 for self defense?" question. I've found that most women who are not shooting enthusiasts and never will be, can become quite proficient with a .22 because of the virtual lack of recoil, muzzle blast, and relatively low report. And let me ask you this. Would YOU want to face the prospect of taking nine .22 hollow point slugs anywhere in your body at practically point blank range? I rest my case.

I suppose a female protagonist could have a limp wrist if she's frail or small boned, so if she picked up and fired a gun, even if she shot straight, it might not reach the intended victim.

Actually, that's a good way to use the computer--like in the photo--in order to avoid carpal tunnel.

It's the way I was taught to play the piano and automatically used it to type and write on the computer.

Interesting post, Ben! I've done a lot of shooting and was married to a weapons handler, but this is the first I've heard the term 'limp wrist' when NOT associated with...er...San francisco culture or the band! I was just always told to keep the wrist steady.

I have a feeling there will be more mysterious "limp wrists" coming up in future novels, Ben. Thanks for the great post!

Great post. I have to go back and do some re-writing.

Ken is correct: the .22lr will do the job close up, and because the grip will be smaller, it fits a woman's hand well. The .22 is known as "The Assassin's Bullet" because the mob often used it for close-up, relatively quiet, hits. Typically, it was two or three quick pops to the tender part of the back of the head, and the job was done, with no flare or loud noise. Me,k I prefer the .22 mag. Just a little more oomph. North American Arms makes a neat little five shot Derringer which comes with both barrels, .22msg and .22lr, and there's a slot safety to ensure the gun doesn't go off by accident while in a pocket or purse. Neat pistol.

The problem with the .22 is that's it's limited to close up encounters. .22lr bullets have been known to glance off skulls or even go plop against a heavy leather jacket. It's not a distance caliber -- .22mag perhaps an exception -- unless it's fired in a rifle.

I hope she loves that gun. My wife is going to start with a .22 also. She's not very comfortable around guns, and it makes a great starter pistol.

Morgan, you raise an interesting point. Many large caliber guns have large grips, which for a woman with small hands, is gonna be a struggle. I agree, this may well happen to a female. Glock is coming out with a series of SF pistols that have a thinner grip. Some models are out already. For .22, a .380, or a 9mm calibers, most semi-autos are available with slim grips, or even in the case of Walther and Springfield Armory, you can get with the standard package two or three alternative grips. This will give you the ability to choose a grip that's comfortable.

Single stack 1911s have slim grips, but they're heavy guns; it requires strength to rack the slide.