Ah Hawaii. Bright sunshine, glistening beaches, soft breezes, green mountains, and friendly people. How could anybody set a hard-boiled story in such a happy place? New York is hard-boiled. Chicago, Detroit, Miami and Los Angeles are hard-boiled. A hard-boiled locale needs darkness, not sunshine. It needs injustice and oppression, not friendliness. It needs violence.

As someone who writes mysteries set in Hawaii, I've run into this from time to time. I've heard editors say no one would be interested in Hawaiian mysteries; they want Elvis and Blue Hawaii. I was on a hard-boiled/noir panel at Bouchercon one year and had a hard time convincing my fellow panelists that there could be any hard-boiled stories set in Hawaii.

Well now I'm reading two books about the dark side of Hawaii. One, appropriately titled, Dark Paradise, is a novel by Lono Waiwaiole (You can't find a more Hawaiian name than that). The other is an historical account of the leper colony on Molokai, The Colony, by John Tayman. 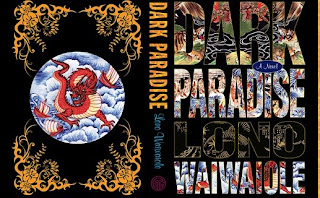 Dark Paradise tells a story of drug trafficking, rape and murder over money and power on the Big Island of Hawaii where ethnic Japanese, Mexican and local Hawaiian groups are fighting for control of the island's methamphetamine trade. "Ice" is a scourge of the 50th state where the appetite for it seems insatiable. Dark Paradise is billed as a "noir-novel-cum-sociological-study" of the society that has resulted from generations of internal colonialism by the United States, beginning with the Calvinist missionaries and continuing through wave after wave of immigrant laborers from Japan, Korea, China, the Phillipines. At the bottom are always the native Hawaiians who are among the most economically depressed groups in the United States and whose only ways out are through sports, entertainment and drug-dealing. 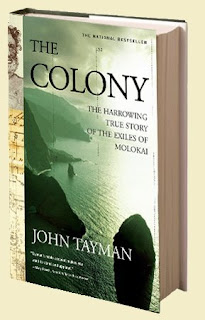 begins with a man and his family in a desperate flight for freedom that led to a military standoff in the mountains of Kauai. The man's crime? He had leprosy. Leprosy, now known as Hansen's Disease, reached the islands in the 1860s and the government responded in Biblical fashion: anyone suffering from the disease was pronounced "utterly unclean" and exiled to a peninsula on the island of Molokai.

The peninsula, Kalaupapa, was bounded at one end by sea cliffs so high and steep that goats fell off. It jutted out like an overturned flat iron into seas so rough that ships couldn't land. Instead, the exiles were rowed close to shore and tossed overboard with their belongings and forced to swim to the rocks. When they got there, they were greeted with the chilling words, "In this place there is no law." They had been tracked by bounty hunters, taken from their families, and forced to this place where all manner of crime and brutality awaited them. The colony had little food and little medical care.

Talk about injustice! Most were not contagious and many did not have the disease. A case of psoriasis was enough to send a man, woman or child into banishment. It was the longest and deadliest instance of medical segregation in American history. There are a lot of villains in the story, not the least of which are the doctors, public health officials and government servants who carried out and enforced the practice. Mostly the story is about the eventual triumph of the human spirit over ignorance and prejudice.

If that isn't hard-boiled, I don't know what is.

I visited the colony two decades ago when there were more than sixty residents/patients. Less than thirty remain and all are elderly. Soon there will be no more victims of the injustice, only memories. The Kalaupapa settlement served as one of the setting of my book, Pilikia Is My Business, but my account doesn't capture the heartbreak and suffering. Read Tayman's book for a picture of the best and worst of human nature. Read Waiwaiole's novel for a gripping tale of life in modern Hawaii.

Both books sound really good. The Colony sounds the most compelling, to me. But I feel I should read them both. I've been to Hawaii once and thus know nothing about the state or the people. On one hand, you think, I don't want to know the dark side. But on the other, you know you should learn more than what is on postcards.

I wonder if once you live there if you ever want to live in another state afterwards.

My father-in-law didn't understand why anyone would want to live anywhere but Illinois.