Last week, Earl wrote about naming one of his characters. It's a great topic because where we get our characters' names is a question often asked by readers and other writers alike. I decided to riff on Earl's theme for this post.
Character names are important because, unlike our first meeting with a real person, the name is what we base our first impressions on. The author will usually give us a name before a description and by the time we get to the description, we have probably formed some image of how the character looks. In my experience, that image will stick with me throughout the story, even when the author's description is at variance with it.
More often than not, a name says something about a character's personality, attitude, and outlook on life. Spade, Hammer, Archer, Gunn, and Magnum are men to be reckoned with. With women, it's usually the first name that indicates toughness--Kate, Maggie, Gina, Diana, or Victoria, for examples.
Names can also give us a character's ethnic or family history.  Bridgette Logan, Lydia Chin, and Precious Ramotswe are characters whose heritages are evident in their names. Victoria Iphigenia Warshawski's name tells us her father's ethnicity and working-class background, her mother's operatic background, and something of her personality--victorious and strong-born (the meaning of Iphigenia).
Names can resonate with other historical or fictional persons. It's no accident that two giants of detective fiction, Marlowe and Spenser, have the same names as two giants of English literature. One of the most complex detectives in modern literature, Hieronymous (Harry) Bosch gets his name from a painter whose work is full of monsters, chimeras, nightmares, and a didactic view of morality. Bosch deals with such monsters and nightmares, internal and external, in every story.
The main character in my current series is a former military policewoman turned private eye. I wanted a name that would reflect her military background, her strength of character and some backstory. I decided on Rome, the iconic image of military strength, for her last name. That gave me a backstory. Her father was a military man named Virgil Rome. With a name like that he has to be an amateur student of the Aeneid. I guess you could say he and I have that in common (in spite of the fact that Troy is an Irish name). But I digress. As a student of the Aeneid, Virgil wanted to name his daughter Camilla, after the Queen of the Volscians, the best developed of all the mortal women in the epic. Even though she meets a tragic end, Camilla was clearly a favorite of the poet.

The Aeneid's Camilla is an archetype, the wounded Amazon, a strong, yet vulnerable woman. Statues of wounded amazons graced the temple of Diana five centuries before Virgil wrote his epic. In one particular battle in the Aeneid, Camilla defeats a warrior in combat and then gloats, "You thought you were tough, but you were beaten by a woman." How often have we seen that scene and those sentiments repeated in modern thrillers? After two millennia, the archetype is alive and well. 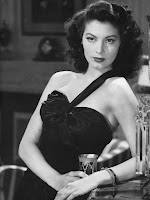 But, much as my character is based on the wounded Amazon archetype, the name Camilla just doesn't evoke the image of strength. So I went in a different literary direction for her first name. There was a fictional PI named Tony Rome created by Marvin Albert. Two of the novels were made into movies starring Frank Sinatra. Sinatra, at that time, was married to Ava Gardner. Ava Gardner is something of a modern archetype, herself--the face of an angel, the body of a goddess, appetites for fast cars, strong drink and messy relationships. I combined the modern with the classical and named my character Ava Camilla Rome.

You're talking to someone who published a book called "What's in a Name?" where not only did I have to figure out the 'right' names for my two protagonists, but then I had to come up with the names they made up for themselves while they were on the run. Add that to the challenge of making sure the reader knew who was who--talk about hair-pulling.

Yes, names are a challenge. Multiple protagonists with multiple names? That sounds like a real challenge.

Yes, names are a challenge. Multiple protagonists with multiple names? That sounds like a real challenge.

You always have such great illustrations for your blogs, Mark.

Names are important in books. I won't read a book if I don't like the names of the characters. That's just the way I am.