I was drafting this post on Monday when the news came that actress Anne Francis had died. The topic of the post was to be guilty pleasures, the books I don't admit, at least publicly, to enjoying. Among those are the Honey West books. Since Ms Francis is perhaps best known for playing Honey West on TV, the news of her passing imbued the topic with a degree of poignancy. I had planned to write about several books and authors, but in light of her passing, I'll confine this post to Honey West. 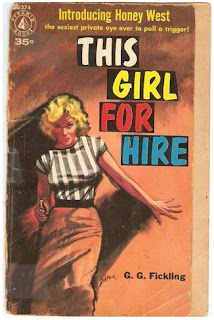 The Honey West stories appeared when a woman private eye, especially one who could fend off bad guys with a gun or judo, was a rarity.  There were eleven books in the series beginning with This Girl For Hire in 1957 and ending with Stiff As A Broad in 1971. They were created by a husband and wife team, Forrest E. "Skip" and Gloria Fickling writing as G.G. Fickling. The novelty of a woman P.I. and the first-person narration were the strongest features of the series. This was not high-concept. Think Marilyn Monroe playing Mike Hammer.
The Honey West series falls in the goof-ball private eye tradition with plenty of odd-ball characters, improbable plots and snappy dialogue. Honey is gorgeous, a fact which the reader is reminded of early and often in every book. She manages to lose some or all of her clothing at least once a book, often at gunpoint, but sometimes through her own (un)doing as when she engages some men in a game of strip poker in order to determine if one of them is a heroin addict. Guess who loses? Both good guys and bad guys are given to such statements as, "Honey, you have more curves than a mountain road." 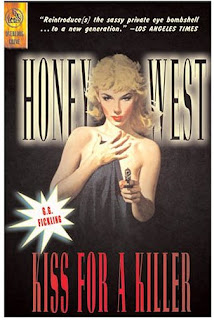 Sexual innuendo drips off every page, but the books are remarkably free of sex. Honey has an on-again, off-again relationship with Lt. Mark Storm of the LA County Sheriff's office and it is implied that they make love at the end of the sixth book, Kiss For A Killer. Many other men try to bed her, and she uses a lot of energy and some judo to fend them off. If a man does grab her fancy, some plot contrivance will usually prevent consummation.
The Ficklings wrote in the era when thin paperbacks with lurid covers abounded on drugstore racks. The stories have little to recommend them in terms of style and originality except for the novelty of the female private eye. However, they brought the Ficklings fame and fortune. The couple lived in a four-story, cliff-hanging house in Laguna Beach known as the house that Honey built.
Though Honey was the first commercially successful female eye, she doesn't fit in well with the in-group of Warshawski, McCone, Milhone et al, although she might get along with Stephanie Plum. Yes, she fought her own fights and solved her cases with her own wits and fists, without relying on male counterparts to extricate her from trouble, but all her efforts seem like something of a burlesque. The books span an era when American attitudes were changing. Today, they seem anachronistic and even somewhat misogynistic. At Bouchercon 2003 in Las Vegas, a panel of writers, all women, talked about Honey's influence. Only one had read more than a few of the stories and two had not even heard of her until being invited on the panel. 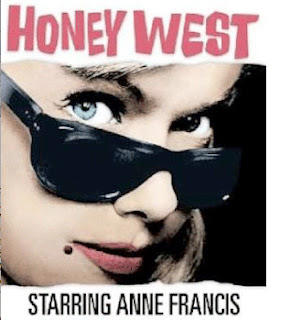 Honey made her TV debut in an episode of Burke's Law in 1965 with Anne Francis as the classy LA private eye matching wits with Amos Burke. Ms Francis, with her good looks and blonde hair, was perfectly cast for the role, right down to the beauty mark beside her mouth. Aaron Spelling spun the episode into the series with which Ms Francis remains identified. For most people, it was their only knowledge of Honey West, but for people like me, the respectability of a TV series meant we could at last bring our Honey West books out from behind the brown paper covers.
In moving to TV, the series lost some of its racy elements, but retained Honey's stylishness and martial arts ability. She gained a pet ocelot named Bruce and a lot of Bond-style gadgetry. She also gained a partner who mainly provided technical support while Ms. Francis, dressed in bathing suits, cat suits or slinky gowns, dispatched the bad guys with a high-kick, judo-flip or well-placed karate chop. She was equally adept with a gun or exploding compact.
Ms Francis won a Golden Globe award and an Emmy nomination for her role, but the series lasted only one season. Honey got knocked out by another kick-ass babe, Emma Peel, when the network execs decided they could import the Avengers for less than the cost of producing Honey West.
Despite its early demise, the series is credited with a number of television firsts: 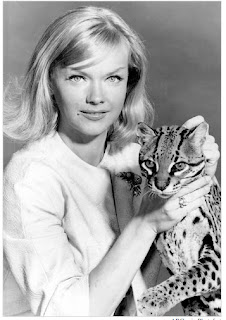 The series set the stage for The Girl From U.N.C.L.E, The Bionic Woman, and of course, Charlie's Angels, another Aaron Spelling production.
Anne Francis once said about Honey West, “The character made young women think there was more they could reach for. It encouraged a lot of people.”


I, for one, think it's a shame the series didn't last longer. The Honey West stories are a pleasure that I don't feel so guilty about. Anne Francis, rest in peace.

I probably shouldn't admit this but I never realized the Honey West TV series was based on a book series. I certainly remember Anne Francis's Honey and agree it's a shame the show didn't last longer.

You probably did not know about the books because they were not your style. That could be a good thing.

My parents controlled most of what we watched on T.V. But I do remember some of these episodes. I will never forget Anne Francis though.
Nancy
N. R. Williams, fantasy author

I never read any of the books (at least not yet), but I do remember the series and thought it was wonderful. She was definitely a new kind of role model for women and young girls. Anne Francis was a great actress that will be missed.

Honey West -- one of many boyhood crushes:)

Thanks so much for all the info on Anne Francis and the wonderful pictures!

She was one of the great ones.

A classy tribute to a classic beauty of our time and to an icon of our genre.