They Could Have Been Somebody 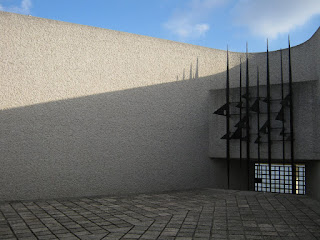 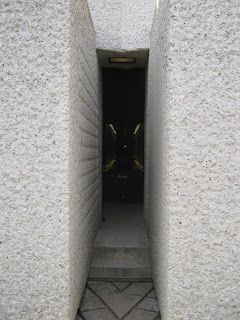 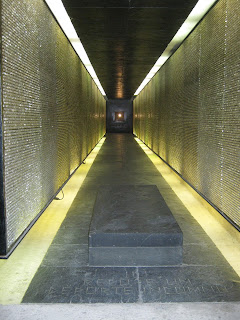 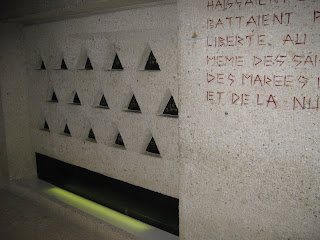 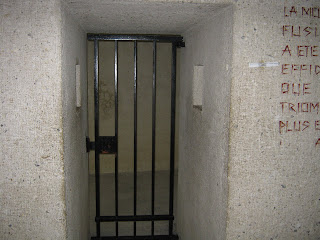 By Mark W. Danielson
One of the most important monuments to freedom lies directly behind Notre Dame at the eastern tip of the Isle de Paris. It is also one of the least visited because its location below ground level. I stumbled onto it many years ago and pay homage whenever I visit Paris. The Monument to the Martyrs of World War II is a tribute to the 160,000 French deportees Hitler enslaved and never returned. Some were part of the French resistance citizen soldiers, but most were people like you and I. The monument’s courtyard is designed to give the visitor a sense of the emptiness experienced by these prisoners with nothing visible but river and sky. Its narrow entrance leads to a single light bead in the floor representing the eternal flame. Beyond that is a crypt lined with thousands of lights that represent these martyrs. To each side is a jail cell reminding us of how these people lived. Facing them are triangular shaped urns filled with ashes from concentration camps; the remains of shattered lives that could have been.
Had Hitler been as good a tactician as he was charismatic speaker, I would probably not be alive. Either that or I’d probably be speaking German. I visit these war memorials because I owe my freedom to those who fought and died. Imagine invaders pulling you from your home and sending you to a slave camp. It happened to these civilian men, women, and children. Sadly, most who visit Notre Dame never see this memorial because they don’t know it exists. Each day, thousands of people wait to walk through this historic cathedral, but few ever cross the street out back, open the gate to the grassy park, and walk down the stairs. For those who do, one visit leaves a lasting impression.
My intent here is not to sell tickets to Paris or discuss history. It is merely an opportunity to reflect on those who never had the opportunity to write as I do. Imagine how many authors are among the ashes in those triangular urns. Think of the stories they could have told. Imagine the things they could have achieved in their lifetime. Yes, they all could have been somebody, but Hitler robbed them of that.
Freedom isn’t free. We’ve all heard that before. But most of us also take freedom for granted. Our ability to post on this web site is a classic example. I post every two weeks, rain or shine, but I also realize I can because it’s a hard-fought privilege, not a right.
Should you get to Paris, I urge you to descend those steps and spend some time in that courtyard before entering the crypt. You won’t leave without needing to write your own story.
Posted by Mark W. Danielson at Sunday, January 30, 2011

Yes, Morgan, our freedom is precious, particularly when considering all of the global events currently taking place today.

Very moving. If I ever get there I'll be sure to visit.
Nancy
N. R. Williams, fantasy author

You won't regret it, Nancy. Like everything in Paris, it will leave a lasting impression.

Great post, Mark. Just reading about Hitler's rein of terror gives me cold chills. Our freedom is precious and we're losing more of it every day.

Jean, the irony is nowadays we are losing freedom to technology, as every keystroke, text, and voice mail can be used against us. Life was simpler when we used typewriters. Still, we enjoy more freedom than most countries.

We really don't cherish our freedom as we should. Great thought provoking post.

What's going on in Egypt is encouraging. At least so far the demonstrations have been relatively peaceful and the Egyptians have been allowed to speak their mind. Let's hope it lasts.

I would love to visit there, Mark. We only need to pay attention to the wars, slaughters, and starvation on other continents to appreciate what we have here. We also need reminders of the atrocities of the past as incentives to keep what we have.

Well said, Earl. Sadly, TV channels like MTV broadcast shows that provide warped views of young adult life. This makes it difficult for these people to understand how blessed they truly are.