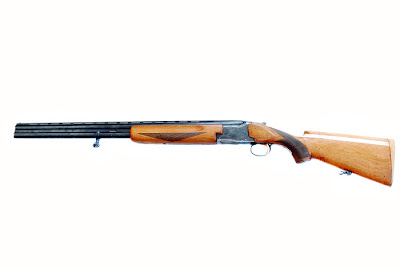 I don't think anyone argues with the notion that the best home defense weapon is a shotgun, but that begs the question. What type of shotgun, what size shell, what size ammo?

Shotgun gauges vary inversely to number progression. So the larger the gauge number, the smaller the bore. Doc Holliday carried a 10 gauge at the OK Corral, a cannon rarely seen today. For a guy as skinny as the sickly Doc, his shoulder must have been numb for days. A 12 gauge has a smaller bore diameter than a 10 gauge, and 16, 20, 28 and the .410 gauges have respective still smaller bores. The most popular shotgun gauge today remains the 12, however, anything larger than a .410 will provide ample home defense protection. While the Taurus Judge has made the .410 shell -- a round once believed to be mostly obsolete -- popular,  the .410 is generally not recommended for home defense. It's just not accurate beyond ten feet.

Choose your shotgun gauge by considering your size and age, not to mention level of comfort. The older you are, the less tolerant your shoulder will be. Any gauge other than a .410 is adequate for home defense. And choose the size of shells you're going to use bearing in mind the same considerations. Many shotguns these days will accommodate three different size shells, usually 2 1/2", 3" and 3 1/2". The latter two are often called "Magnum" and "Super Magnum" respectively. Trust me: You don't need a large shell to be effective for home defense. Stick with the smallest shell available for your shotgun's chamber.

Shotguns vary by type of feed, too. Some are single shot, some double barrel, some over-under, some semi-automatic, and my all time favorite, the pump. I highly recommend a pump shotgun for home defense. I don't think anyone doesn't understand what's behind that ominous click-clack. Pump that hummer, and you may not have to shoot.

Shotguns come in pistol-grips too, but I don't recommend one unless your name is Arnold and you were once governor of California. Anyone with osteo or rheumatoid arthritis certainly doesn't want to shoot one. I cringe even at the thought of it, but then again, such guns are usually pump actions, so the click-clack may make firing unnecessary. I've got one --  no, Ben's not a pseudonym and I've never run for office -- but I've never fired it. One ugly-scary looking beast. 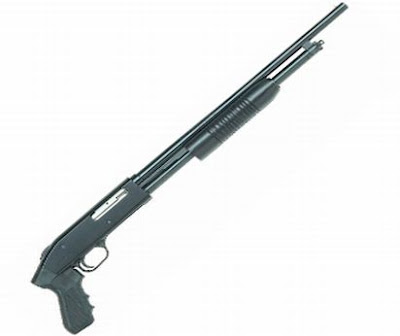 Ouch! Doesn't that look painful? Grip it tight or recoil may be a bop on the bean.

But let's assume you've determined your gauge and type of shotgun. What size ammo to use?

A slug is essentially just what you imagine: One big plug of steel or lead, usually fifty caliber. That's a lot of whammy, and will be the most painful to shoot at whatever gauge you've chosen. While slugs are good for deer or elk hunting, I don't recommend them for home defense. Besides, the only thing you're likely to hit may be your neighbor two houses over.

Before choosing your size of ammo, you need to understand why a shotgun is the best weapon for home defense: You don't need good aim. Flinch away. Because shotgun barrels -- except the Taurus Judge-style pistol -- aren't rifled, the pellets inside won't spin. So instead of a true and accurate spiral, like from a rifle or pistol barrel, the lead or steel pellets inside the shell spread. The spread will pattern outward. You can adjust the pattern spread by insertion of a muzzle-choke to squeeze your lead or steel shot any way you want, horizontal, vertical or any combination in between; but you don't need a choke. Expect about a two foot diameter spread twenty feet away without one.

Shot shells vary by size and number of BBs inside, again inversely to number progression. In other words, the larger shot shell number, the smaller the BBs and the more in number. See the following size scale: 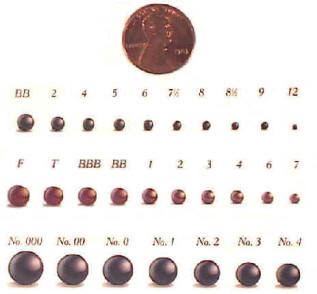 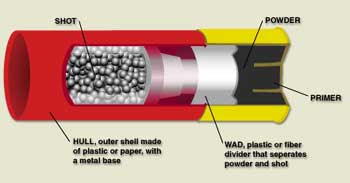 The low number shot shells (OOO, OO, O, 1-4) are usually called "buckshot" or "buck". Consider that these are essentially 9mm bullets, which will penetrate bad guys, your walls and maybe your neighbor's, too. Again, while such rounds are good for killing deer or humans, I don't usually recommend them for home defense, unless loaded as a last resort after having already fired rounds of bird shot (shot shells 7-9). Some might disagree about using bird shot for home defense, but if the click-clack doesn't scare an intruder away, a body penetrated with up to seventy or more BBs from bird shot surely will. And close up, bird shot will devastate. Even with the Castle Doctrine -- now being considered in Florida in connection with the Trayvon Martin shooting -- your goal should be protection, not intent to kill. So for my home defense, I load my shotgun with bird shot first, buckshot last. Six rounds of escalating fire power.

The only downside to choosing a shotgun for home defense -- other than the owie-factor, of course -- is where will you keep it? Do you have children, for instance? Do you need to keep your shells separate from the gun? Do you have a safe to accommodate it? Can you access your gun and ammo, load and rack your slide in time?

I do not recommend flashlights attached to shotguns because the bad guy will see you first and your ambient night vision will be ruined. But others may disagree, and it's so tacti-cool to have one.