by Linda Thorne
On my scheduled post in April, I wrote about letting go of my second book, admitting semi-giving up, but with one catch. On occasion, I can't resist tinkering with it. I don’t know what will happen long-term, but I needed to shake that burden of guilt that goes with leaving a loosely completed manuscript sitting in draft form. 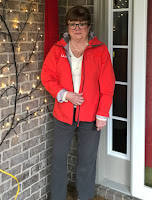 To complete my debut novel, Just Another Termination, I practically lived at critique groups and every time I got stuck in my writing, I left one of those meetings knowing what I needed to do. With my full-time job and husband’s health, I’m no longer willing to spend my off-time at critique groups away from home. This has taken its toll on my writing.

Last weekend I was paging through my current manuscript, A Promotion to Die For, and began moving segments of plot from one section of the book to another, making changes. I was rewording some of these sections when I noticed something a critique member would  likely have caught if I'd taken these pages to be critiqued. I’d been giving readers more information than they needed, writing down to them as if they were not as savvy as me at catching the storyline. I took out some details that could be brought up later, if they ever needed to be explained at all, and the scenes read so much better.

Readers need to enjoy the story, love the characters, and get it. I believe this occurred in my first book; that is, if those who read it were honest with me. I’ve enjoyed books where I have room to guess and make my own assumptions. In many cases, I'll find out later whether my guess or assumption was incorrect when the writer explains what she previously left unsaid. Sometimes I finish a book without some parts being clarified, holding onto my original presumptions. Does it really matter if what I thought differs from what the writer had meant? Often not since the reader will view a scene, situation, or character differently from how other readers do, including the writer.

I’m sometimes thrown off by an unknown word, term, gesture, or activity obviously familiar to the author, but not to me. I prefer the challenge of figuring it out or, at least, getting the gist myself for what’s happening rather than to be fed a detailed account.

I enjoyed that moment last weekend, looking over my neglected manuscript and, at the same time, discovering a problem that gave me a topic for this Make Mine Mystery post.

Email ThisBlogThis!Share to TwitterShare to FacebookShare to Pinterest
Labels: A Promotion to Die For, Just Another Termination, Linda Thorne, Trust Your Readers Make Mine Mystery

I even miss most of my Sisters in Crime meetings. It happens when we get up there in years.

I have some trusted readers who look over my manuscript before I publish.Amazing what they find.

Yes, those other sets of eyes always help.

I hate having the obvious explained to me too! Readers are not asleep. You want to keep them on their toes, thinking. Great reminder.

Thank you. I need reminding a lot.

I agree that we need to respect the intelligence of our readers. I also think it’s ok to use words that readers may or may not know. But many, like my husband, don’t agree with me. With an ereader

You’re reporting good progress on your novel, Linda, so you’ll get it written eventually. Next month I’m finally releasing my third novel. It’s been five years since my second one. Im not sure how long I’ve been working on it, but I kept letting life get in the way whether it needed to or not.

Like you and many others, I have a husband with a lot of health issues, so he’s my priority.

Enjoyed your post. Our local critique group didn't meet for a while due to Covid, but since then we are meet with Zoom. Our group is small, about 8. With Zoom a large group wouldn't work well it everyone had something to read and one or two would have wait till next time. The Zoom works, but it's just not the same as getting together in person.