Mystery is Alive and Well in Los Angeles… 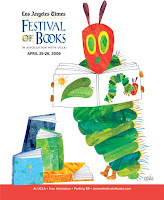 ...as evidenced by the crowds funneling through the Sisters in Crime/Crime Time Books booth this weekend at the L.A. Times Festival of Books! Despite a steady, slightly nippy breeze that threatened book cover stand-up displays and sent flyers and postcards airborne, the overall atmosphere was one of happy camaraderie and plain old “glad to be here” sentiments. But were they buying?

“Doing much better than we expected” was the most oft heard response. Attendance was also much better than expected. Still, the competition for a piece of the stimulus check was tough. Nearly 300 exhibitors--including booksellers, publishers, literary organizations and an estimated 450 authors--offered their wares to an as-yet unannounced number of patrons, expected to be around 130,000. Yes, it’s big, likely the biggest book festival of its kind in the U.S.

I sold my share of my lighthouse mystery, POINT SURRENDER, and my middle grade mystery, LOCKER SHOCK! It is always such a thrill to see a reader grasp a book and talk about their anticipation, most asking for an autograph and sometimes, a photo. It is also a gas hanging out with the other authors from my publisher’s house, Echelon Press. This weekend, we had Teresa Burrell (THE ADVOCATE), Gayle Carline (FREEZER BURN), Jeff Sherratt (GUILTY OR ELSE) and Melinda Richarz Bailey (WOOF: WOMEN ONLY OVER FIFTY), all touting brand new releases. Teresa and Gayle’s books were actually first day releases! Also on board was J.T. Turner (DFF: DEAD FRIENDS FOREVER), teen author Alyssa Montgomery (WHERE ARE YOU?), Alexis Hart (DARK SHINES MY LOVE) and me!

I always get a kick out of the variety of giveaways and promo items being handed out, and often wonder at the bottom line benefit of such practices. Handouts included everything from candy to free anthologies, sampler CD’s, coloring books, and (get this) knitted yarn necklaces. As a consumer, I can honestly say I don’t think I’ve ever had a freebie sway me toward making a purchase. But maybe I’m the exception.

One big beef I have with festivals of this type is the cost of food. Blatant price inflation is rampant. I went into the food court with $20.00, came back with two chipwichs, one ice cream bar and $8.00. Huh? Even one of my favorite food chains was offering an orange chicken-rice-veggie bowl for $7.50, when in their restaurants they offer the same dish for (typically) under $5.00. Isn't that extortion?

Today I am achy and hoarse. I think I made a small amount of profit on the weekend, if you don’t count the meals and the gas. Would I go again? Yes. But next year I am selling ice cream and rice bowls, too. 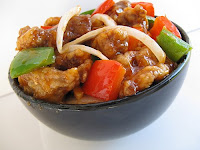 I was there too and decided this is my last L.A. Times Book Festival. I did pretty well selling at the Sisters in Crime booth. I did stop by and say "hi" to your publisher, Karen Syed, who looked great, by the way.

Yes, the food prices were horrible, lines in the bathroom daunting on Sunday, but it is an amazing event.

Sorry I missed you! I was at SinC on Sunday at noon. I got a kick out of watching Denise Hamilton run back and forth to sign books for a line of people. She is awesome.

I will pass on your compliment to Karen!

Only regret was that I didn't get to see Michael J. Fox. I think the world of him.

I had a fabulous time and would definitely go next year. Was Michael J. Fox there? I didn't know that. I would have even stopped pitching to see him. I didn't stop for food, (who could afford it anyway) but for Michael I would have.

Of course you will go again next year! You are a natural. You learned out to "work the crowd" and it paid off. Congrats for doing so well on your first outing! Can't wait to read THE ADVOCATE!

Sounds like a great time was had by all! Envy you being with such a fun group.

glad it was successful, even if the food was a rip-off.

You're right. The food was extremely expensive! But the atmosphere was amazing, and I had such a great time! I'm definitely hoping to go back next year:)

So glad to hear Echelon authors did so well. I can't wait to be there next year. Paying taxes came first this year :(