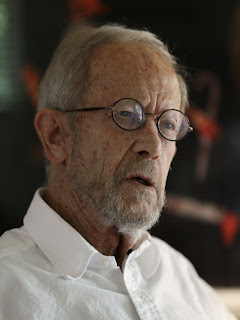 “Dutch” Leonard’s overnight success began in 1951, when he flipped a mental coin to decide between writing crime novels and westerns. “Westerns won because I liked western movies a lot,” he said, “and because there was a wonderful market for western short stories. You could aim at the Saturday Evening Post or Colliers, and if you missed there, try Argosy, Blue Book, and on down to the lesser paying pulp magazines, the most prestigious being Dime Western and Zane Grey. Right behind them were Ten-Story Western and Fifteen Western Tales.”

Leonard was always been an avowed reader. “A bookworm, yes,” he said, “beginning with The Bobbsey Twins and The Book House volumes of abridged classics that included everything from Beowulf to Treasure Island. In the fifth grade I read most of All Quiet on the Western Front, serialized in the Detroit Times, and I wrote a World War I play that was staged in the classroom, my first piece of writing.”

His first nine years were spent south of the Mason-Dixon Line, the youngest of two children. He lived in Dallas, Oklahoma City, and Memphis before moving to Detroit in 1934, during the World Series. Raised a Catholic, he graduated from Detroit High School and the University of Detroit, both Jesuit institutions where he majored in English and philosophy.

A baseball player during high school, he acquired his nickname “Dutch” from teammates, who borrowed it from the Washington Senators knuckleball pitcher. The second Dutch Leonard served in the Navy during World War II with a Seabee unit in the South Pacific. Four years later, he acquired a bride and a new job with an advertising agency.

Leonard lusted for full-time writing, and remembers a letter from his agent in 1951, which attempted to discourage him from quitting his advertising copywriting job to freelance. He had concentrated on truck advertising for Chevrolet and, by that time, had a tank full of writing catchy ads. Getting out of bed at five o’clock, he wrote two pages of fiction before going to work “with the rule that I couldn’t put the water on for coffee until I’d started writing. I’ve been a disciplined writer ever since.”

While working for the ad agency, he supplemented his early morning writing by placing a pad of paper in his desk drawer. With the drawer partially open, he wrote fiction on the job. His first two short stories were rejected, so he decided to spend more time and effort on research. Although he had never set foot west of the Mississippi, he concentrated on the Southwest, Apaches, the cavalry and cowboys, while subscribing to Arizona Highways magazine to learn all he could about the arid terrain. His first sale the previous year was a novelette titled, “Trial of the Apache,” which sold to Argosy for their December issue. His next story, “Tizwin,” earned him a rejection letter from Argosy and a sale to Ten Story Western, which eventually appeared in print in 1952 under the title, “Red Hell Hits Canyon Diablo.”

Thirty of his short stories sold during the 1950s, four of them to Argosy and the Saturday Evening Post, while the majority appeared in Dime Western and Zane Grey. Leonard sold everything he wrote with the exception of his first two short stories and several with contemporary settings. By the end of the fifties, television had taken over. “The pulps faded away and the book advances didn’t compare to what was once offered. It took nearly two years to sell Hombre, for an advance of $1,250.” Multiple printings followed, with the book listed among the twenty-five all-time best westerns. Hombre more than made up for its meager beginning, along with a film version starring Paul Newman, which earned the writer a modest $10,000.

Gunsight was his last western novel, written at the request of Marc Jaffe in 1979 for Bantam Books. Leonard then flipped his genre coin and found that crime can pay quite well. Stick and LaBrava made him an overnight success, nicely padding his wallet along with the 1985 film version of Stick, starring Burt Reynolds, a production he prefers to ignore. The writer’s innate humor is deadpan, he said, not slapstick.

Glitz sparkled for eighteen weeks on The New York Times bestseller list, ensuring him top billing on the literary marquee, but although the film rights were optioned by Lorimar, production stalled for more than two years.

His sudden popularity cut deeply into his writing time. “It’s nice to get fan mail,” he said, “a few letters a week, and being recognized on the street, but the interviews are wearing me out. I’m asked questions about writing, and about my purpose in the way I write that I’ve never thought of before. And I have to take time to think on the spot and come up with an answer. I’m learning quite a bit about what I do from recent interviews, and getting a few answers.

Interviewers ask Leonard for advice for budding writers. He usually responds with: “The worst thing a novice can do is to try to sound like a writer. I guess the first thing you have to learn is how not to overwrite.” His advice is simply to write. “Don’t talk about it, do it. Read constantly, study the authors you like, pick one and imitate him, the way a painter learns fine art by copying the masters. I studied Hemingway, as several thousand other writers have done. I feel that I learned to write westerns by reading and rereading For Whom the Bells Toll.”

A portrait of Hemingway hung on the wall of his office, reminding him that he studied the revered novelist’s work for “construction, for what you leave out as well as what you put in. But I was not influenced by his attitude, thank God. My attitude is much less serious. I see absurdities in serious situations, influenced in this regard by Vonnegut, Richard Bissel, and Mark Harris, and this shows in my writing. It’s your attitude that determines your sound, not style.”

Leonard wrote for many years in longhand on specially-ordered yellow sheets, rewriting and revising until he was ready to type his final draft. “I’ll do a few pages this way and then put it in my Olympia manual office-model typewriter,” he said. “I hate to change ribbons, but have no interest in electronic advances. How the words are eventually reproduced is not my concern. I revise as I type, aiming for five or six clean pages a day. Then I continue to go back and revise and the pages begin to pile up. Sometimes I’ll go back and add a scene or shift scenes around, but most of the revising has to do with simplifying, cutting out excess words, trimming to make it lean or to adjust the rhythm of the prose.”

(This was an early interview with Dutch Leonard and can be read in it's entirity in my book,  Maverick Writers.)
Posted by Jean Henry Mead at Friday, August 23, 2013