Parker, a Not So Perfect Hero

Through engaging in quite a few critiques, I learned that a hero should behave heroically. It's okay to throw in a few flaws or foibles to show he or she is human, but be sure not to include too many, or the reader won't bond with the character.

Last night, the DH and I watched the movie, Parker, adapted from Flashfire, the 19th novel in the Parker series by Donald Westlake a/k/a Richard Stark, the 1993 Grand Master of Mystery Writers of America.

What struck me about the movie was that Parker, the hero, was far from perfect. For one thing, he dressed as a priest to commit a robbery at a state fair. That was far from heroic. He also managed to kill off more people than I could count.

Then, why did I root for him, other than the fact he was portrayed by Jason Statham, a guy not too difficult to look at?

Here are a few methods which I believe turned this far from perfect man into a hero:

Can you think of any other ways to portray a not so perfect person as a hero, or maybe you'd like to offer another example from a book or movie? Hint: One clue is in my photo below. 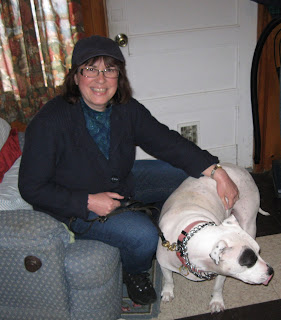 Hi Morgan,
No matter how tough a man hero is, I think he should be able to admit he is wrong.
I'm not sure about your hint; but in my book, dogs are always heroes.

I'll give away my hint. It seems no matter how mean a person seems, if you add an animal to the mix and show love for that animal, the person has redeeming qualities.

One of my favorite characters is Lawrence Block's Keller, a hit man. Block takes you along with him while he completes his contracts, but he makes Keller so interesting, you don't mind what he does for a living. As far as I know, Keller has never killed a dog.

It takes imagination and talent to create a hero that's actually an anti-hero and to make it work.

People who treat pets kindly do come off better in fiction. As far as flawed "heroes" I think flaws make a character both more realistic and interesting.

Great post, Morgan. I certainly don't want anyone to abuse animals in books I read--but it doesn't concern me much as to whether there is a pet in a book or not.

Thanks for the critique, Morgan. We don't expect or even want our heroes to be perfect. Even Superman has his vulnerability.