Three Weeks on the Road
By Randy Rawls

I had the pleasure of driving out of Delray Beach on July 2rd, headed for Texas. Three days later, I drove into Dallas, thinking I'd come as close to paradise as I'll ever get. Yes, I love Texas. I will never deny it.
But I ask myself why. I grew up in northeastern North Carolina. I spent a career in the Army, bouncing from here to there and back again—not once to Texas. After retirement, I wound up in Minnesota, not exactly the same weather as any part of Texas. Then back to Virginia for several years before . . . yes, I finally made it to Dallas. I loved it and began my Ace Edwards, Dallas PI, series there. Then I moved to South Florida, about as far from Texas as you can get—socially, environmentally, and weatherly. But when I drove into Texas on July 4th, I felt like I'd come home. Yeah, as I tell folks here in South Florida and any other place I visit, my heart resides in Texas—and I mean it.
But that was only the beginning of a wonderful trip. On Friday, I had lunch with an old friend, Bob Gaston. It was a joyous occasion as Bob has recently had his first book published—THE WAR WITHIN. It's an excellent book that spins an intriguing story of 1870's West Texas while exploring PTSD after the Civil War. Kudos to Bob. Bob and I killed about three hours while the waitress worried whether we'd ever leave. Great time. I'm hoping to conduct an interview with Bob in the near future.
On Saturday, the 6th, I had the opportunity to speak to the local chapter of Mystery Writers of America. Good friends, some of whom I knew over the Internet, some I was meeting for the first time, and some I knew from my days in Dallas filled the room, including Earl Staggs, Kevin Tipple, Carolyn Williamson and Bob Gaston. Everyone was gracious, and I only hope I didn't bore them too badly.
Then off to Austin to spend several days with my daughter. That reminded me that I see my two children, Tracy and David, entirely too little. Am I the only one who finds it strange that we live in a world where families split to the four winds—hardly like the one I grew up in? Tracy is in Austin and David lives in Norfolk. Of course, saying he lives in Norfolk is close to a misnomer. Just this week, he landed on an oil rig off the coast of Africa where he'll spend huge hunks of his future.
From Austin, I traveled to Denton for the conference, Lexicon. It was a fun weekend with lots of people who share my love of writing. Also, Sylvia Dickey Smith and Earl Staggs were there making it kind of an "old home week." Also made lots of new friends. Thanks to Mitch Haynes for all his hard work.

Back to Richardson for a Monday evening session with the Writers Guild of Texas. Another fun evening with wonderful writers. Again, if I bored them, I apologize.
My last event in Texas occurred on Tuesday morning when I was interviewed by Crazy Dougie of WANB radio in Waynesburg, PA. It was a fun session with Doug Wilson walking me along like a well behaved puppy. If you ever get a chance to talk to Doug, grab it. Following the interview, I pointed my Kia east for home.
Three days later, I parked in my driveway, tired but filled with good feelings. It was a wonderful three weeks—ones I'd re-do in a heartbeat.
Hope everyone is looking forward to the release of my BEST DEFENSE in November as much as I am. Okay, I guess not. But I'm wired enough for all of us. 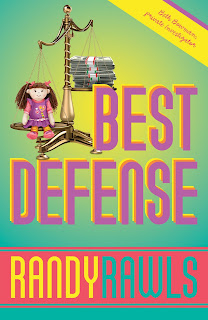 Sounds like a wonderful trip for a writer. I know you enjoyed every minute of it.

Yes, you certainly made good use of your travels, hitting all the mystery writing hot spots and enjoying Texas!

Enjoyed your Texas travel log, Randy. I'm from a small town in central Texas and I lived in Austin for 25 years. Although I spend most of the year in the Pacific Northwest, I'm in Texas every winter. There's so much to love about the state. Good luck with BEST DEFENSE.

Randy, it's always fun to pal up with you. You should come to Texas more often. You belong here.

Very glad to see you, Randy at the MWA meeting here. I had hoped to attend the WGT deal in Richardson, but things did no work out.

Anyway, good to see you like always and thank you for spending the time.

Randy, it was a delight to have you here in Texas. Our MWA chapter rang with your praises. Hurry back...