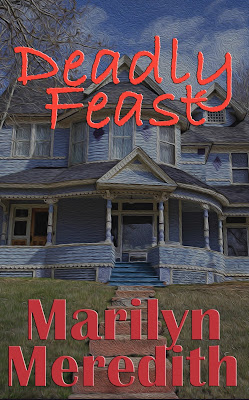 Deadly Feast had a former life.

Many years ago this story was called Guilt by Association and the publisher did not want it to be on Kindle though it was available as an ebook downloadable from the publisher's website. Not an easy sale. The publisher has now folded up shop and given rights back to all her authors.

So, now under the new name of Deadly Feast the story has been resurrected. The former title, Guilt by Association, though a good one, is being used on several other books now and I decided this one needed a new name.

There is even more of a history here. When I first wrote the book it was intended to be a Deputy Tempe Crabtree mystery. However, when I finished, I realized it wasn't Tempe at all. So I changed all the characters and the setting, though the story was still the same.

While working on it for Kindle, I found errors to fix and did a bit of updating.

It might be called a "locked-room" mystery, because all the characters are trapped on one side of a flooding river and the bridge is out.

Blurb: While investigating a murder, Leslie York, the resident deputy of the mining town of Copper Creek, finds herself stranded on the wrong side of the creek when it turns into a raging torrent. Others driven from their homes by the flood gather together, but one of them turns up dead.When Leslie begins to suspect the victim's death was murder, she suddenly finds herself in peril, struggling for life in the angry floodwaters.

"Deadly Feast" is on my Kindle. Can't wait to read it! BTW, I love the cover!

Great cover, Marilyn!
Also, isn't it always the case that it seems there's always something that can be corrected or updated, no matter when you write a book!